Dear Dierdre, I think I might be a denier

Lately I have been having strange thoughts.  I was reading the IPCC report that came out in 2007 and thinking, can it really all be true?  Then I started looking into it.  First of all I read a bit of a blog by James Delingpole, nothing hard, you understand.  Just soft stuff that anyone can understand.  He introduced me to Lord Monckton who used graphs and stuff to get me onto the harder stuff.

Monckton got me into some serious climate change model falsifying and hockey stick breaking and introduced me to Mr Big, Anthony Watts who got me into his circle of climate science skeptics, meeting up every now and again to share stolen emails and pass around the HADCRUT, really serious stuff.  Now I think I am addicted to climate science denial.  How would I know and what can I do if I am addicted? 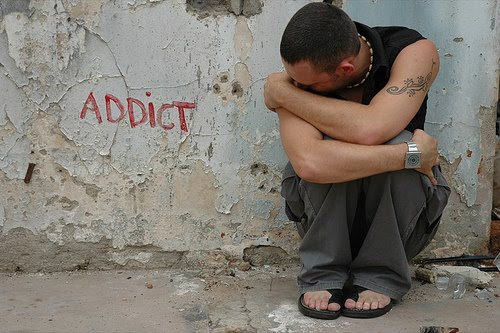 From what you tell me it is quite possible that you are addicted to denialism.  It would have helped if you had given more information.  For instance, do you find all your graphs begin in 1998.  Do you see only the same four or five emails or do you actually spend time on the other 4,995?  These are important questions.

Your story is so typical of thousands.  You meet someone on the Internet who tells you interesting little bits about themselves, perhaps they are an English graduate, or a member of the house of Lords who isn't actually a member, or they used to be a weather presenter on the TV.  You get mixed up in that world of celebrity. Then they go from the soft stuff, like warming hasn't been happening at a statistically significant rate this century to harder stuff, like curve fitting and adding spurious constants to their models.  Then finally they hook you on the hardest stuff: the new world order conspiracy in which a bunch of shadowy people working above governments are taking over the world. Or perhaps they've told you it's about lizards.

Once you are hooked, there really isn't very much that can be done.  You see, when someone points out a mistake in your analysis of Central England Temperature records, you will react with abuse and not with a polite thanks, I will change it next time.  When a comment questions something about your data, you will accuse them of being in the pay of someone even though your money comes from a person who you were put in contact with by a shady right wing think tank that formerly took cash from tobacco companies to deny the effects of passive smoking.

You could try aversion therapy.  That requires you only to log on to sites written by bona fide climate scientists.  Or you could try cognitive behavioural therapy where you will have to sit and think about why you've been deluded into thinking that people with qualifications in massage, journalism, English Literature or none at all are competent to criticise let alone disprove scientists who have studied the subject in detail for twenty, thirty years, and not in their spare time at home after a day's work.

In the end, your delusions are likely to persist if you hang around with the same old friends who keep telling you how wonderful your article on volcanoes or polar bears or tree rings is.  Remember, they are addicted like you are so they are hardly likely to be thinking straight.

I wish you well in getting better.