Back in the days following my graduation, when I was exploring the avenues cut off by my formal study, I remembered an English lesson when, in the midst of studying (in the most loose of senses) My Family And Other Animals by Gerald Durrell, the teacher, Mrs Went, mentioned the more arty brother had a new novel out.  It was called Livia and the fifteen year old me stored the information against the day when he might read it.

That day came six years later when I came upon it in the local library, the one full of anti-Shakespeare books.  It took me the entire fortnight to get through, mostly because I didn't really concentrate on it, but partly because it is a novel full of weird ideas of self, consciousness and the artistic experience.  That and the fact that the novel was the second in a series of five.

Well, I say series but that's not strictly correct because it was five novels arranged more like the spots on a die: four towards the corners and one in the centre, a quincunx, I am told.  And the plot, such as it was, did not follow anything approaching a linear path, and some characters were imagined by other characters, so some were real and some fiction, and so on. 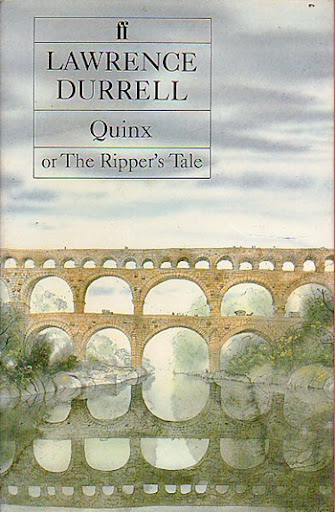 Anyway, over the next year or so I read avidly the works of Lawrence Durrell, appreciating his skill as a prose writer, even if he was too often stuck in a treacly passage more purple than the most purple thing you could ever think of.  By this time, Durrell's five volume novel, collectively called The Avignon Quintet of which Livia was a part, was nearing completion, and, I suspect, Durrell was running out of energy.  He was no longer a well man, suffering from emphysema and the final book in the sequence, Quinx (1985), doesn't match the invention and liveliness of the earlier volumes.

One thing I appreciated in Lawrence Durrell's novels was the science.  Or at least, his use of science as a metaphor, more than the science itself.  Durrell's most famous work, The Alexandria Quartet (1957-60), is inspired in part by Einstein's theory of relativity, the first three novels in the sequence tell the story from different viewpoints with the fourth telling the same story with the dimension of time.  Of course, this is Galileo's theory of relativity, that the position of the observer makes a difference.  Einstein's is wholly more involved than that.

The Avignon Quintet uses Freud's ideas of mind as a launchpad.  It's all about consciousness and self.  But the problem in the end is that Durrell was not a scientist and though he used these ideas, he didn't really seem to get them.  His best books in the end are not his novels, bowed down by the weight of ideas, but his travel books in which his powers of description and poet's eye could come to the fore.

This year is the centenary of Lawrence Durrell.  He died in 1990 and is partially forgotten in spite of being one of the most famous British novelists of the last century.  I don't find his books on the shelves of my local Waterstones.  His younger brother, Gerald, is the more famous, the more readable and the one whose legacy is likely to remain longest, for Gerald transformed the idea of the zoo from a place where animals were exhibited to a place where animals were saved from the evils that humans can bring upon them because they are not always safe in the wild.  Few serious zoos around the world remain as places of freak-show zoology.  The public's attitudes have changed too much to allow that.