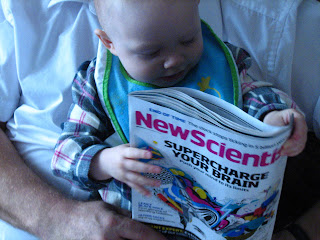 Meet my granddaughter.  Here she is, aged eleven months, holding a copy of the esteemed journal New Scientist with a totally appropriate cover story.  She is certainly supercharging her brain.  Everyone who spends more than a passing moment with her says how clever/bright/intelligent (delete as appropriate) she is.

But how intelligent is she?  According to http://childdevelopmentinfo.com/child-development/language_development.shtml at age 24 months she should be able to do the following verbal things:

Well, she certainly names common objects and she understands prepositions but doesn't necessarily say them.  She has used 3 word sentences ("See you later") and her babble is becoming more and more intelligible.  Her rhythm and fluency are getting pretty good but she is loud.  I haven't heard her use pronouns but the word "mine" has been part of her vocabulary for about ten months (and is going out of use now at 26 months).  And she's been responding to commands for a long time too.  If she drops something, and she is told to put it in the bin, she will pick it up and do just that.  In my house we have two bins - one for general rubbish and one for recyclables - and she can tell the difference. 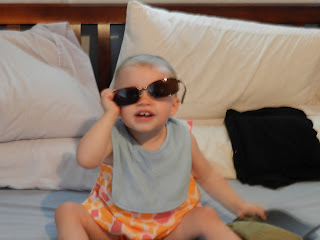 My granddaughter has an impressive sponge like capacity to fit in with her surroundings.  At 20 months, she went to Florida for a fortnight.  During that fortnight she barely uttered the word "hello", preferring to use "Hi".  And she loves to talk, to anyone, family or stranger.

The point here is, we reckon that she's an intelligent little girl but how can we tell.  How do you measure intelligence?  It's not about language entirely, is it?  Parrots are reckoned intelligent, as are certain cephalopods, and certainly dolphins. But how can we really tell? 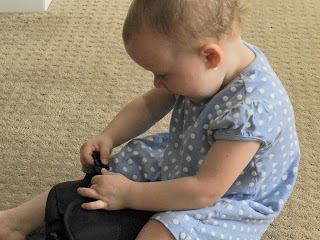 One way is problem solving.  Toddlers are very keen on solving little puzzles that they set themselves.  Here's the granddaughter working the clip on my camera bag.  Once she had worked out how to open it, the bag became a receptacle for one of her stuffed toys.

One of the best ideas on intelligence I have ever come across is in “Why Don’t Students Like School?” by Daniel T. Willingham (2009): intelligence is the ability to make connections.  This is why knowledge is important.  Without the knowledge, it is impossible to connect two things. And we don't do learning like we used to.  I remember having to learn thirty words of French vocabulary a week, with a test of twenty of them and a pass mark of fifteen.  Without the vocabulary, you couldn't understand the language.  So you had to learn it.

Such a simple definition means you can discard those ideas of multiple intelligences.  All that you require is knowledge (or experience) in certain fields.  I love music, for instance, and know a bit more about it than my wife, so I can appear more intelligent on musical matters even though I have a tin ear and the the dexterity of someone knitting spaghetti with their fingers when it comes to playing the guitar.  My point is simple: if I can make the connections, I appear intelligent.

So, how intelligent are, for example, my granddaughter who can make rudimentary connections, and Stephen Fry, who undoubtedly knows just about everything.  Well, as evidence for the intelligence of my granddaughter I adduce these instances.  Last week, I went round to collect my step-daughter and her offspring.  I told them we were going shopping.  The granddaughter replied "Tesco".   And a few days before that, when I went round, I said "Hello trouble" to her.  She replied "Hello trouble.  Susie's trouble." Susie is her cat.  Connections.  That's the key.