I mentioned Francis Bacon in my post on the Shakespeare authorship question, mostly in passing.  Bacon (1561-1626) probably didn't have the time to write the works of Shakespeare because he was far too busy being just about everything else.  Wikipedia describes him thus: "an English philosopher, statesman, scientist, lawyer, jurist, author and pioneer of the scientific method."  He was certainly the sort of Renaissance Man that the term was invented for. 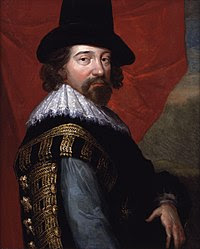 Bacon's scientific claim to fame is his codification of the scientific method as a form of induction.   The weight of evidence forces scientists into their conclusions.  This idea was very powerful, persists in many minds today (and in TV programmes galore), even though it is obvious, as Darwin pointed out, that observation and evidence are all weighed in the light of the theory being pursued.  GCSE science certainly had an inductive method in mind in the good old days of planning-observing-analysing-evaluating.  Lo, those days are back, more or less.

Back in Bacon's day, however, science was new.  Experiments were, on the whole, simple because the basic laws of nature were just becoming apparent.  And that's how scientists like Galileo and Gilberd saw themselves working.  Galileo especially was making important discoveries in the field of dynamics which, when taken aboard by Newton, turned into the three laws of motion.  They look like a good example of Bacon's inductive approach to science: the evidence impelled Newton to come up with those laws.

Trying to replicate the process in the classroom uncovers the counter-intuitive nature of this approach to science.  A body in motion usually slows down on Earth because of the invisible forces of friction.  Demonstrating to students that a force is needed to slow something down is not so easy.  Not all students get it.  Newton needed to make a leap that Bacon doesn't allow.  He had to see a force that wasn't at all obvious, friction.

Francis Bacon died a scientist.  Killed by science, according to John Aubrey.  On his way to Highgate, then a village outside London, Bacon determined to test his idea that keeping a chicken cold would slow down its decay.  Jumping out of his carriage, he stuffed a chicken with snow, in the process achieving two things: firstly showing that cold conditions do slow down decay (but not why) and secondly contracting the pneumonia that would bring his demise (and hasten his own decay, as it were).  Hubris, perhaps.
Posted by Catmando at 12:29