More on the travelogue trail, the Kennedy Space Center is my most visited overseas location.  I first went there in 2003 and in all I've been there something like ten times.  Being the rocket enthusiast, being the one inspired to go into science by the Apollo programme, it's like my kind of pilgrimage.  Anyway, here are some of my holiday photos: 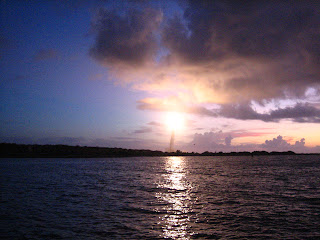 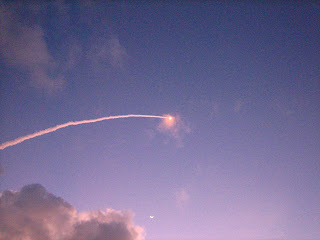 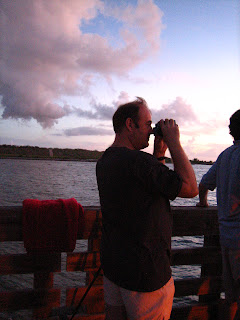 And here am I with my video camera catching the launch - the booster is now far over the Atlantic.

Luckily, my wife's sister lives in Florida although on the Gulf coast, so any trip to see my sister and brother in law comes with a built in trip to the Kennedy Space Center.  I have to go.  I've been a dozen times now and if we go out again this summer, I shall be going again.  My pilgrimage is to the altar of the great Saturn V building.  When the doors open from the Apollo 8 countdown simulation, I am a little boy again, and looking up at the rocket's immense first stage all I can be is tiny.  I can't believe I can get this close to one of those rockets, the very thing that sparked my interest in all things scientific.  I can't quite reach out and touch it although I must admit to the laying on of hands in the rocket garden. 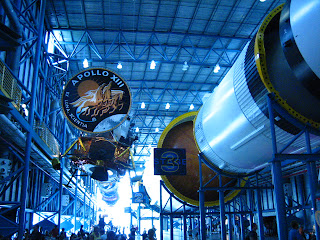 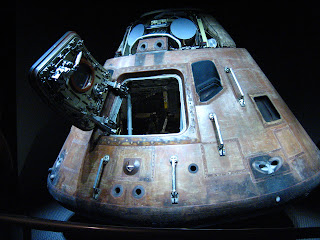 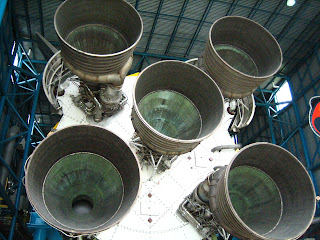 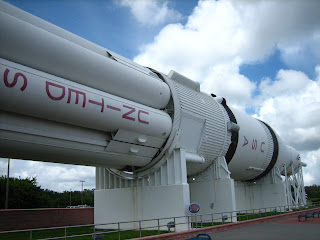 If you want to go, log on to http://www.kennedyspacecenter.com/ which will give you as much information as you could possibly want.  There are three tours you can go on.  The standard one takes you past the Vehicle Assembly Building (a gigantic 500 foot tall shed where the Saturn V and the Shuttles were put together), a viewing platform a mile from pad 38 (where the Moon missions and the shuttles launched) and the Saturn V centre, another giant shed keeping the refurbished rocket in good shape.

But there are two other, add on tours.  The Up Close tour takes you onto the edge of pad 38, almost, and up against the fence around the VAB.  It is good but not as good as the Then And Now tour, the history tour that takes you out to the old pads where the pioneering manned missions of Mercury and Gemini took off and where Apollo 1 met its fiery end.  It is a nostalgia trip even for those who didn't live that era.

So forget Disney and Sea World and Orlando's tourist traps for a day and drive the hour or so out to Cape Canaveral.  Better still, do what my wife and I do.  Book a hotel and take two days to do KSC - your ticket entitles you to free entry on a second day if you get it stamped on the way out.  Two days means you are not pushed to get into the IMAX films and out to the sites - you can relax and take your time.  Oh, take some water too.  It can get very hot.