Today is the Winter Solstice.  Well it is here in the northern hemisphere.  Anyway, at 5.30GMT this morning, the Sun reached it's southernmost point and has begun the northward journey back towards what passes for a summer in this pudding island of Great Britain.    So a bunch of "druids" arrived at the enigmatic monument of Stonehenge to celebrate the fact.  Obviously winter is not so hospitable as summer so many fewer turn up at this time of the year to see the sun rise at 8.03GMT (see here)..

But the whole alignment for Stonehenge is with the setting sun at the Winter Solstice.  And if you are there when the sun goes down, you get this spectacular view.  Like this 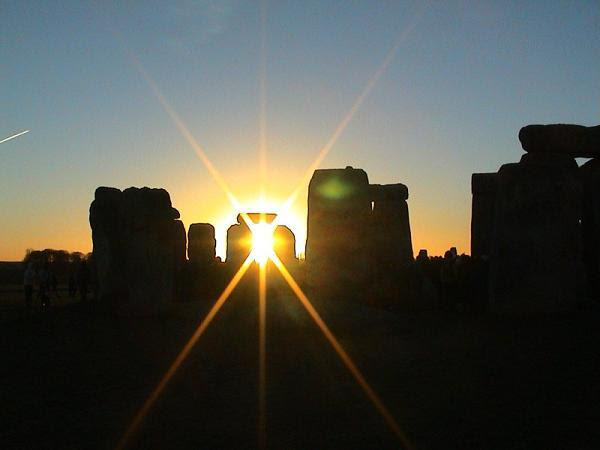 A simple examination of a plan of the site shows that the Summer Solstice is incidental and that the Winter one is the only one that matters.

The Stonehenge site is more than just the circle of stones and the attendant banks and ditches.  It is a much wider landscape, including a processional way, known as the Avenue, which arcs all the way back to the river Avon.

Those celebrating the feast of the end of the year and the beginning of the new one would have walked the Avenue, turning about half a kilometre north east of the monument and catching sight of the setting Sun above the stones.  Whether there was, as Mike Parker Pearson contends, a land of the living at Durrington Walls, and a land of the dead at Stonehenge doesn't matter here.  It's a matter of logistics.  A priest, followed by hundreds, perhaps thousands of followers, can't really turn around having walked the Avenue to see the rising sun.  It only takes a bit of bad timing and there are people pushing to get in to see while others have already staked their places.  This might not have been a big problem four thousand years ago but we know what happens when crowds get too excited or impatient.  I cannot see how the Summer Solstice works as a festival here.
Winter festivals are important events.  Ignoring the religious aspects, there was the practical one.  Many animals were slaughtered at this time because food was scarce and the food to keep these animals alive was running out.  So a feast of fresh meat at the time of the Winter Solstice was a practical thing.  And the list of festivals at this time of the year is  lengthy.  Besides Christmas, there was the Saxon Yule, the Germanic Modraniht, , the Persian Yalda, the Roman Saturnalia and the Hindu Diwali.  And that's just a selective list and it doesn't include those other winter festivals.  I know there are midsummer festivals, most of which seem to include bonfires and some feasting, but the significance of the midwinter ones is obvious.  The Sun is reborn at this time of the year.  It dies then comes again.
Archaeologists are innovative people who have to come up with explanations or all sorts of mysterious finds with little to go on.  The work done with Stonehenge (there was more only this week about the origin of the bluestones) has been fantastic.  The problem is, we will never know the true reason for its construction, and later conversions and rebuildings.  We can only speculate and argue our case.
Posted by Catmando at 05:30