Yesterday I had Christmas dinner with my dad.  A pretty ordinary thing, you might think, were it not for the fact that at the start of the year that was something that looked very unlikely.  Dad has three different kinds of cancer, and two of them played up in 2011.

The first to be diagnosed, in 1991, was a benign skin cancer that has resulted in my dad having a number of small tumours removed from his face over the last twenty years, and a number of skin grafts to repair the damage.  As he says, he's not quite as handsome as he once was.  Still, he is 81 so you can't expect his youthful good looks to be preserved.

In 1997 he was diagnosed with prostate cancer.  The tumour was small, non-aggressive and easily treated, though the radiotherapy he had wasn't fun.  But he took it all with good humour and got on with life.

But in 2006 he was found to have Non-Hodgkin's Lymphoma.  It was in his abdomen, on the left hand side near but not in the pancreas.  He had been unwell since October 2005 when he had a flu vaccination and felt a bit poorly.  Eventually the doctors decided that something should be done so at the end of February 2006 dad found himself transported to hospital with the expectation that something would be done to cure him but most of all to find out what was wrong.  Not that the latter was too difficult.  Having visited my dad in hospital, my brother and I had a lengthy chat in the car park and both agreed it was cancer.  When I saw the lump in my dad's side, that much was more than obvious.

Now we had the worst of the NHS.  It took three weeks to work out what was wrong.  Three weeks in which my dad got the sort of non-treatment that the newspapers occasionally highlight is given to the elderly in hospital.  He was given plates of tepid food and expected to get on with it.  He was observed but no one seemed in a rush to diagnose anything.  He had a medic take five attempts to get a canula in his hand, eventually succeeding, having waited most of the day for anyone to come to tend to him.  Finally, he got an MRI which told the doctors what we could have told them already it was cancer.

Now we got the best of the NHS.  Treatment began within forty-eight hours.  Chemotherapy and radiotherapy in combination.  I sat with him on one chemotherapy session, one of about ten he undertook.  It was tedious.  He sat in a chair, hooked up to the cocktail of cytotoxic chemicals that coursed through his veins, stopping the cancer cells in their tracks.  And making his hair fall out.  At least I could get up, go to the shop or the canteen, walk around.  Dad had to sit, listen to the horse racing on the radio, read the paper, then read it again, have a snooze.  And mum accompanied him without complaining.

Not that mum wasn't worried.  She was but she wasn't prepared to think of the consequences if dad didn't pull through.  And she had previous experience of cancer.  Her mother had died of breast cancer in 1949, and my brother's first wife had also died of breast cancer in 2000.  Before that, I remember my mum crying at the kitchen sink when told the news that my brother's best friend, Alan Frost, had died of testicular cancer at the age of 22.  So she was right to be afraid.

As it was, dad got better and better.  He had a buddy, our cat Bailey, who had been diagnosed with the same form of cancer in 2004.  Whenever I chatted with my dad on the phone, he would ask about Bailey. Bailey was having the same steroids and regular chemotherapy tablets (which we had to give him, wearing plastic gloves so as not to get anything on our hands) and stayed healthy for 18 months before he had a steady decline and died in August 2006.  Much missed.

Dad kept getting better and, with six monthly check ups all boding well, managed to get through the rather sudden loss of my mum, his wife of 58 years, in 2008.  In September 2010 he had a comedy accident when he fell through my brother's ceiling (while my brother was away on honeymoon) after a leak occured in the roof.  A few weeks later, he couldn't urinate and was taken in to hospital for treatment.  Investigations suggested a tumour in the bladder which was later revised to pressure from a newly increased prostate.  The prostate cancer was rearing its head and had spread to the bones, we were told. 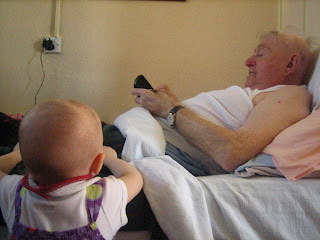 At about the same time dad was having trouble with his vision and sought help from his GP who forwarded him to a specialist who forwarded him to the local cancer unit.  How he made the deduction, I don't know, but a scan later and we knew that the reason for the sparkly thing in front of dad's vision was a number of tumours growing in his brain.  He would be facing this without mum and there were some dark moments ahead.  At Easter this year, he was bed ridden, his hair had dropped out, his weight had gone down alarmingy (and he was asking for smaller trousers).  When we took him out it was in a wheelchair.  He enjoyed the fresh air but I don't think he was enjoying life much. 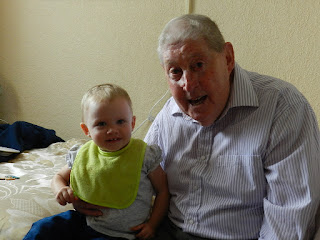 And then he began to get better.  I went down to see him and took my granddaughter with me.  She clambered onto his bed and stole his grapes.  At eighteen months, she was full of life and full of potential and I think my dad perked up in the face of such uninhibited life.  What a wonderful therapy.  The two love one another - if dad's not where the granddaughter thinks he should be, she gets grumpy.  And if I don't take her, my dad asks why not.

So Christmas 2011 was the one my dad didn't think he would see so he assemble the family around him.  His specialists, both of whom he saw in the week before Christmas, are happy with him.  Both the malignant cancers are at a standstill.  The treatments have done their job.  His quality of life is good.  The year is ending much better for my dad, and therefore the whole family, than it looked like doing.  I hope to be saying similar things in a year's time.
Posted by Catmando at 09:49