I was thinking about a playlist for Mr Willard Anthony Watts, former weather presenter, aspirant scientist and college dropout.  I suspected that at sometime in the 70s, at one of the frat parties he probably listened to through the wall because he wasn't invited, he heard the words quoted above, with all their venom and anger.  Mr Robert Allen (Bob) Dylan was rather bitter at the time.  Mr Willard Anthony Watts is bitter now.

He's bitter because the government wants to take a few cents off him in order to prevent the oncoming disaster of global climate change and he doesn't want to give them any more money than he thinks they deserve.  And in order to achieve this less than laudable aim, he chooses the sarcasm of science to try to derail the efforts of environmentalists and governments to try to do good.  Didn't know science could be sarcastic? Spend some time amongst the cherry pickings, the improbable outcomes and the outright falsehoods at Wattswrongwiththat for more than a few minutes and you might see what I mean.  Today's postings are tomorrow's digital fish wrappings.  The ever prolific wannabe Galileos and even accredited scientists churn out so many new bits of tortured data that I implore Obama for close WATTMO now, the place where captured emails are interrogated for the whereabouts of the missing decline while having Bon Jovi played at top volume 24 hours a day.

You get the picture.

And tonight a picture is what is most agitating our Willard.  This picture. 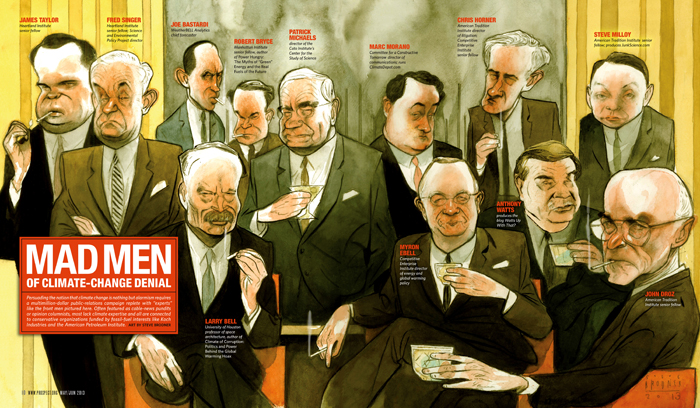 Here is a detail, showing our friend Willard: 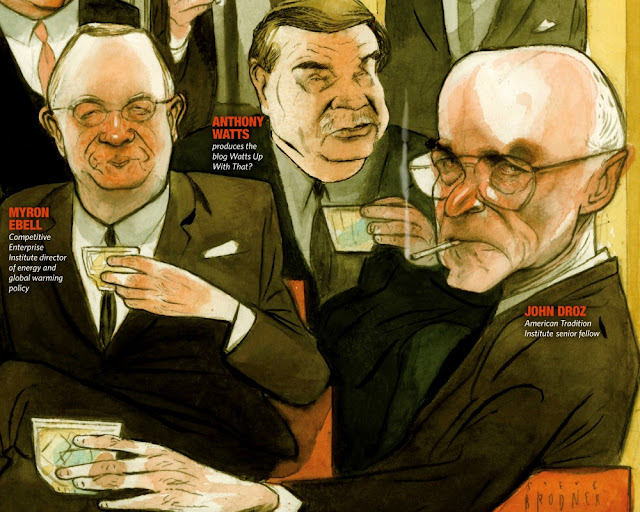 It's difficult to work out whether our Willard is annoyed that people around him are smoking ("While the cartoon is funny, the smoking portrayal does bother me a bit about this cartoon,  because it is personal, and the artist of course is just another low information sap who works with popular memes" from Willard's blog) or that some of his buddies aren't there.  There is no Lord Christopher Monckton or Dr Roy Spencer, for example.  Well, the artist had to make a decision and chose to omit that pair, along with a handful of others who spout the pseudoscientific nonsense of climate change denial.  Would I have chosen to expand on the ten and include the mad Monckton, for example.  Perhaps, just to show his ideas up to the light of ridicule and reason, in the reverse order.
Does Willard know that the artist, a talented man called Steve Brodner, is being personal about the smoking?  I doubt it.  The poster is a parody using the TV series Mad Men as a hook on which to hang the satire.  I've never watched the series.  I suspect a lot of the characters are puffing on fags in the show.  But I just don't know.
What I might surmise from Willard's reaction is that he is both genuine in his disgust at smoking and rather paranoid.  Not perhaps a surprise when you look at the company he keeps.  Not necessarily in this picture but on his site.  Some deeply strange connections lie underneath.

Anyway, since I thought I'd give Willard something to listen to, perhaps a few choice tracks ill cheer him up, remind him that his buddies are great to be with (though I should imagine the conversation is more than a little tedious - forcings this, sensitivities that, sixteen years...)


So, Willard, covert these to mp3, put them on your iPod and listen to them this evening to brighten up what must have been a miserable day, another day of posting the fish paper ramblings of wannabe Galilleos.