The Bull and Bjorn Borg - Lord Monckton doesn't do satire

You have to hand it to Lord Christopher Monckton, 3rd Viscount of Brenchley.  In my house, a viscount is a chocolate biscuit expensively wrapped in aluminium foil. In his house, it is someone who apparently has forgotten his expensive degree in classics. All right, it was forty years ago, but you'd think someone with the sharp and incisive mind of Lord Monckton would be able to get satire right.  He went to the same university as those arch satirists, Peter Cook, John Cleese, Stephen Fry, Derek Pringle. And he must have read Juvenal, so I won't insult the intelligence of my readers by quoting Juvenal in the original Latin:

Oh, all right then.  I understand that some, unlike Monckton and myself, did not learn Latin, so here is a translation:


You see, there is something essential about satire.  It is this:


Satire is a genre of literature, and sometimes graphic and performing arts, in which vices, follies, abuses, and shortcomings are held up to ridicule, ideally with the intent of shaming individuals, and society itself, into improvement.[1] Although satire is usually meant to be funny, its greater purpose is often constructive social criticism, using wit as a weapon and as a tool to draw attention to both particular and wider issues in society. (from Wiki)

Did you spot it?  Of course, you did. It's the word "wit".  Over at WUWT (archived, I hope, I've given it a go myself this time), Monckton has what is described as a satire but it is the most witless piece of bull I have read in  many a long month.  And that is both a criticism and a literal description, because most of the time Monckton is going on about bulls and borg.

For those of us of a certain age, Borg means:

For others of a more nerdy disposition, the association will be with half human, half machine creatures concerned only with success.  So that would be Bjorn Borg again.

But Monckton means these things, from Star Trek: The Next Generation or something.  Not a fan, even though Patrick Stewart is an excellent actor, even when he had hair (as in I,Claudius).

I actually think these are the things that Monckton is referring too.  But if we want evil bureaucratic aliens then we really need the Vogons who destroyed the Earth in episode one of The Hitch-Hiker's Guide To The Universe.  Are you following this because it is easier to follow than witless Chris's attempt. 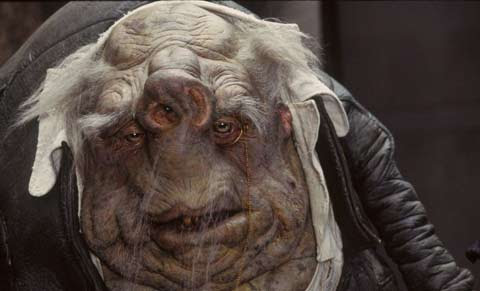 Talking of following, Juvenal said it two thousand years ago:


Refrain from doing ill; for one all powerful reason, lest our children should copy our misdeeds; we are all too prone to imitate whatever is base and depraved.

Monckton tries, oh, how he tries, to be satirical. But it is about as heavy footed as a Vogon guard. Satire is best kept nimble, for it's lightness is the weapon. All the talk of bulls and borgs is littered with passages that are not satirical at all, in intent or in execution, but are simply straightforward comments on what Monckton believes is wrong.  If that was what he wanted to say then he should have stuck to it. The laughless, lifeless thing, titled The Bull and The Borg is, like so much else that Monckton touches, just not very good.

And the saddest thing is that Monckton should know better.  He studied, presumably, though perhaps it is folly to assume he studied anything at Cambridge, classics. That is, he studied ancient Greece and Rome and would have studied their literature, in the original language.  But he didn't learn comedy.  He is a figure of fun, one ridiculed in large parts of the world, but he himself has no comic touch.

Someone who did study classics, and learnt much while she was about it, is the comedian Natalie Haynes. Monckton would do well to listen to her.


I shall be busy for the next few days I think, tending to family matters. But I couldn't let Monckton's unfunny satire go without comment.
Posted by Catmando at 14:30