Scientists in the making

We tried to take our granddaughter to the Natural History Museum today.  We didn't make it.  We went round the corner to the Science Museum instead.  The reason: there were just too many people there.

Not that the Science Museum was much better.  It was as busy as I have ever seen it but the queue for the Natural History Museum (yes, queue) was more than an hour long.  I have balked at queueing that long anywhere (although I did shuffle around for seven hours to pass the Queen Mother's coffin during her lying in state a decade ago).  A drizzly, reasonably mild day in November means quite a sacrifice to stand in line outside for an hour.  And with a not quite four year old.

The last time I went to the Natural History Museum (can I still call it the BM(NH)?), you had to pay and consequently it was a whole lot quieter.  Same went for the Science Museum.  Abolishing entrance fees has certainly made it a half term trip again.  I wish I'd spotted that before I went.  Perhaps I would have gone on Sunday instead, when the chances are that fewer parents would be bringing their budding boffin offspring for a few hours of dinosaur and full scale blue whale model fun.

Budding boffins.  Too right.  Each and every one of the children, and a good many of their parents too, would have learned something, enjoyed themselves and been reminded that science is actually fun, no matter what some in the Cabinet might wish were otherwise.  And what so many children reminded me was that kids love science.  They might not realise it is science they are doing when they watch a spider in its web, or play with boats in the bath, but it is science.  Dinosaurs are science just as much as the Large Hadron Collider.

I often wonder how representative my experience with science is.  I grew up watching red spider mites on the doorstep on hot summer evenings.  I grew up catching butterflies on the Buddleia spikes hanging over the fence from next door.  I grew up working my way through the I-Spy book of The Night Sky.  I grew up looking for unusual stones in an old sandpit.  I was allowed to be inquisitive.

All of those children, in line for the BM(NH) or in the Science Museum were having their inquisitiveness fed.  Good for them.  These were dull eyed children of cliché, staring at tablet screens and getting repetitive strain injury from the PS3s.  These were bright eyed children.  I spoke to one mother who said that she brought her son to the Science Museum regularly, as a treat, after school usually.  And he loved it each and every time.

My granddaughter loved it too.  She was disappointed not to see the dinosaurs but since she loves planes, she enjoyed the flight gallery.  Here she is, posing in front of the Rolls Royce Pegasus engine, the kind that powered the Harrier jump jet: 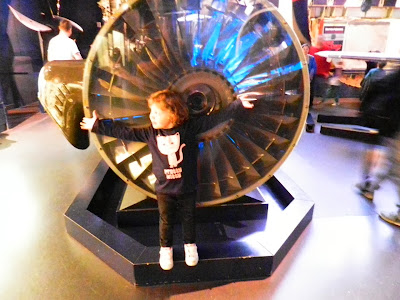 She ran around and looked at bits and pieces and thoroughly enjoyed herself.  She will make a good scientist, if she chooses.

Somewhere there may butt in some cynicism or the cranky sort of scepticism that somehow changes a point of view on science.  At the moment she relies on those that know better to guide her.  She was good as gold on the Underground because we had warned her.  Off her leash, she investigates.  She learns fast.  But she will become less trusting of authority and have a greater confidence in her own ability to make decisions.  That's natural, and it is something I would want for her because she will have to make her own decisions, make her own life, at some time in the future.  But I hope she will listen to those that have made an in depth study of matters and evaluate their learning with an appropriately critical eye.

What I mean is that it is easy to lose site of what experts actually are.  We don't usually meet people we think are experts in their field because we don't realise that most, if not all, people know something about a topic that is more in depth about that topic than anything we know.  It is easy to convince yourself that you know better.  I can change a fuse, wire a plug and understand parallel and series circuits but I am not an electrician.  I get an expert in to do the real electrical jobs.  I take my car to a car expert when it needs a service.  But most people don't see those sorts of workers as experts.  Someone who explains the behaviour of the electrons in the wires is what they mean by an expert.

Somewhere along the line a lot of people get misled about science.  They retain their wonder and awe about some of the things science finds out, but they also tread dangerous paths.  The sort of path that Lynne McTaggart has taken, cloaking unreliable findings with a veneer of confidence they do not warrant.  Or Lord Monckton, twisting facts to fit a denier/contrarian world view.  It is essential that we continue to show that such distortions of science are not permissible.
Posted by Catmando at 14:18