What Lynne McTaggart doesn't tell you - could it be the truth?

The "suppressed" edition of WDDTY, the cancer special, has hit the newsstands.  I counted 12 copies of it in my local W H Smith this morning and will be back to check how many there are in a fortnight's time to see how well it sells.  By that time I should imagine that the martyr who was St Catherine will have nothing on the martyr who is Lynne McTaggart.

When the first direct to the public edition of WDDTY came out in September 2012, a number of people noticed and commented.  One of those was Simon Singh, TV producer, better best selling author than Lynne McTaggart, possessor of actual science qualifications, who contacted the distributors and pointed out how dangerous the magazine was.  In the intervening time, the baton that Simon first picked up has been taken on by others in the sceptical community.  Advertisements have been adjudicated upon by the ASA, links handily curated by Josephine Jones.

What we do know is that the bastion of free speech that is Lynne McTaggart is keen enough to delete Facebook comments she doesn't like yet, in the editorial of the "suppressed" edition, November 2013, she has the gall to say:

Singh and a small cluster of his Sense About Science associates began a mass email campaign,
bombarding every supermarket and retail group with emails and a hate campaign of trolls on our Facebook
pages.

Since I am banned from her pages, I cannot comment to her directly on this.  However, I do know that I am not now, nor have I ever been, a practising Sense About Scientist, although I fully support what they are aiming to do.  And my hateful comments included asking serious questions about what the mendacious Ms McTaggart clearly doesn't actually want to admit.  She is wrong.  Just wrong.

The editorial comments on the Times article of 1 October that got her blood to boil:

The article also said we’d claimed that vitamin C “cures” HIV, that homeopathy  could treat cancer, that we’d wrongly implied the cervical cancer vaccine has killed “hundreds” of girls and that we’d
told parents in our latest (October 2013) issue not to immunize their children with the MMR vaccine.

The problem is, no matter how else you try to read it, a cover blurb that says Mega Cure For The Incurables: Vitamin C fights it all, from measles to AIDS 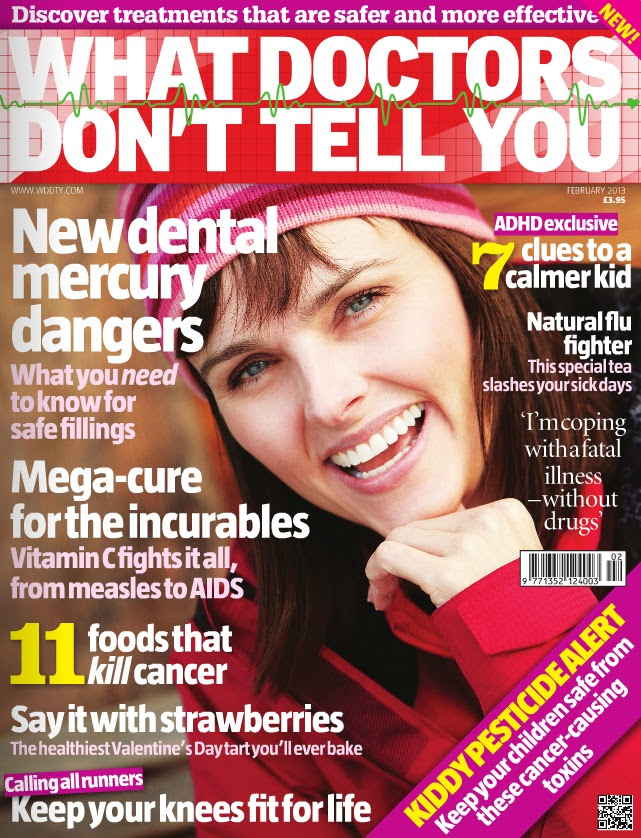 and has this at the start of the article: you could be forgiven for thinking that they actually were claiming it.  So apparently we dreamt it all up.  Shame it is preserved in print and electronic versions.

It's easy to take that one down.  Look at Josephine Jones's page to see what others have done to debunk this woman.  We know that her statement about the journalist at the Times not contacting her is not true.  He tried.

McTaggart concludes her essay into the unchartered waters of ignorance with this:

And that’s how we will continue to publish this title—unafraid to ask the unpopular questions and to publish the inconvenient truths.

She could also have written:


And that's how we will continue to publish this title - unafraid to misrepresent research, use debunked or poor research, ask questions that have already been thoroughly answered in the negative and publish convenient to our advertisers untruths.

But don't believe me.  Look at the magazine itself and come to your own conclusions.