A man is known by the company he keeps

Today on WUWT Anthony Watts posts his talk to the organisation Doctors For Disaster Preparedness.  Nope, I'd never heard of them either. 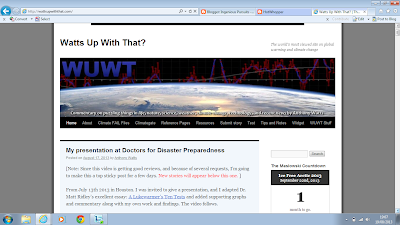 Anyway, before I get onto the good Doctors, a little word about the video.  It's been online since 13 July which makes you wonder why Watts didn't puff it before.  Perhaps because it isn't very interesting. Perhaps, get this, because it wasn't even original.  He says he stole borrowed the idea from Matt Ridley.  Not perhaps the best source.

Anyway, enough of that.  What else do Doctors For Disaster Preparedness do?  Organises conferences and puts out a newsletter.  From what I can tell, the organisation is against AGW and veers very close to being antivax as well.  The latter is very strange for a bunch of doctors, but then I don't think this is really about medicine, although their conference in July this year had a day's course on mass trauma.  That's the sort of thing I would expect them to be doing.  But the main bunch of talks were about:

Just the sorts of things hard working physicians should be spending their time (and $250 entrance fee) on - nuclear energy, the Kennedy assassination, climate change, the US financial system, climate change, climate change...  I am beginning to wonder if this is really about medicine.  No, wait.  The last talk has a medical point and mentions a kind of disaster as well.  Money well spent after all.


The Association of American Physicians and Surgeons (AAPS) will supply a certificate of participation for up to 5 hours of CME credit for Friday’s course and 15 hours for the meeting. This is not accredited as AMA/ACCME “Category 1,” but is accepted in some states for at least part of the CME requirement for license renewal.


If you do the Friday first aid course, you get some credits for the training.  If you do the whole weekend, you get 20 credits in total, that won't be accepted by the American Medical Association or the Accreditation Council for Continuing Medical Education but might be useful in some states as part of the necessary training to renew your licence.  Not really much use then, if you actually are a doctor.

That's because the AAPS is the American Association Of Physicians And Surgeons and that's not really a  medical organisation either.  It's another of those groups that don't really seem to exist in the UK, though I may be wrong, that are based on a libertarian/conservative set of ideas and purvey contrarian, if not outright denialist, views on a number of things.  It publishes the Journal of American Physicians and Surgeons which doesn't have the same reputation as, say, Nature or Science. In fact, some of what it has published is rather wacky.  AIDS denialism for one.  Don't need to believe me, try here.

So I don't think the real aim of these two organisations, that share the same address, is actually saving lives and making people better.  As a result, my title here is apt: Anthony Watts talks to these people, and these people have some very weird (in some cases racist) views.  Nothing to do with evidence based medicine but everything to do with ideology.  And our deniers skeptical friends wonder why they don't get the respect they think they deserve.  What does it tell you about Watts in particular, climate science deniers in general?  I leave it to you to make up your mind.