OK, children.  Today we are going to do a simple exercise with percentages.  What does 95% actually mean?

Let me give a bit of context first.  Here is a sentence with the number 95% in it?  We need to try to work out what that means in this sentence.

Drafts seen by Reuters of the study by the U.N. panel of experts, due to be published next month, say it is at least 95 percent likely that human activities – chiefly the burning of fossil fuels – are the main cause of warming since the 1950s.

Does it mean:
a) 95% of scientists think human activities are causing global warming, or
b) there is a 19 out of 20 chance that observed warming is the result of human activities.

You're ahead of me, of course the answer is (a).  At least it is if you are Willard Anthony Watts.   Why else would you conflate a 95% probability with an observed 97% consensus in this headline@ 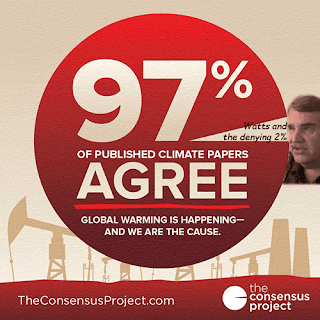 Because Willard doesn't read, doesn't take time to consider what he's writing and doesn't stop to check.  And the duck in an echoic chamber that he operates prattles on without thinking too. Or is it so his Wattbot commenters can just make the usual head nodding murmurs and give their assent to his jottings.  For the best science site in the world, it sure is sloppy.

Just in case you didn't get the point, here's Willard's worked example (for those that also missed it, Riger Pielke Sr dissented from the AGU statement the other week, the only one of the 15 who signed it off):


That “squeeze out” is about right, look at Dr. Roger Pielke’s minority view with the AGU:
http://wattsupwiththat.com/2013/08/05/pielkes-response-to-agu-statement-on-climate-change/
His minority view was one of 15 people that made the statement.
That works out to about a 7% minority view (or 93% majority) on that panel

Will Willard post a correction when someone points out his schoolboy error?  Don't bet on it.  Bet instead on Essex in the T20 finals tomorrow.  You won't win your money back but at least you will have made someone else slightly richer.  One is a number as well.  Eventually, climate change denial will fizzle because the evidence, already overwhelming, will reach into the grey cells of even those hardest cases.  And of course, Orwell knew what a minority of one meant.

By the way, Italy was ruddy hot.  Hotter than average.  I haven't seen too many posts on the skeptical sites mentioning the European heatwaves this summer.
Posted by Catmando at 13:44