The other week I wrote about why we should argue with deniers - because their anti-science beliefs have real world consequences (delaying climate change mitigation, failing to vaccinate children against easily preventable diseases, allowing the deaths of hundreds of thousands from HIV/AIDS because they are denied life saving treatment, and so on).  Letting the deniers know they are wrong and educating them to understand better is a whole different matter.


When I began writing sceptical articles on this blog, it was because I had long been interested in it.  And being in education myself it was something I encountered quite frequently.  When I began in education, I met the Moon landing conspiracy arguments often and luckily a lifetime spent reading and studying the Apollo programme enabled me to answer the argument.  I knew my stuff.  For example, the famous picture of Buzz Aldrin on the Moon, was one being hawked around as evidence that the landing never took place. 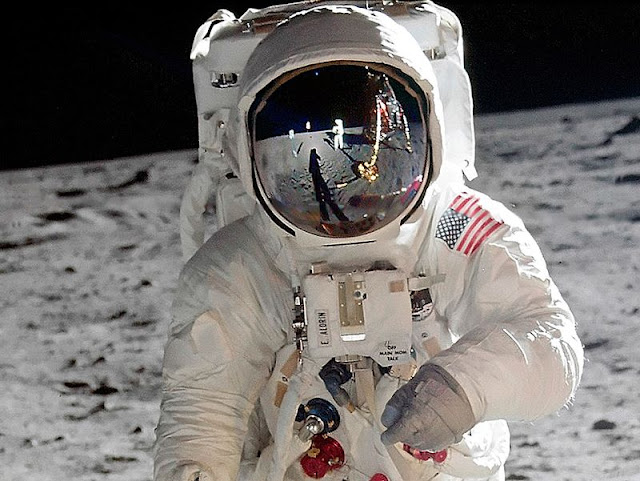 A little research, a little mental modelling of the landing site, and it was clear what was portrayed in the reflection in the visor is neither a helicopter nor a floodlight.  It's the camera that was giving us the TV images that enabled the whole world to watch (assuming they had a TV set).


The key to arguing with the lunar landing deniers, then, was evidence.  Give them evidence and they either had to deny the evidence was real or find another bit of evidence to argue.  As each bit of evidence of a conspiracy was knocked down, the deniers rapidly lost the will to keep going.  It wasn't worth it then because they were on their own with no one to back them up.  In a one to one, face to face situation, turning a denier around was not easy but it was feasible.


In the anonymous world of the Internet, however, arguing with deniers is much harder.  For a start, an ad hoc gang of deniers will find a comment thread to join and the token realist is often on their own.  And one reason they are often on their own is because they have strayed onto denier home ground where deniers congregate to show their ignorance to one another and pat one another on the back for being so ignorant.  Not that they would agree that that is the case but there you go.


And the Internet allows them to find the links to the spurious evidence to support their ignorance and smugly shout "Ha ha, gotcha" when they think of something that you might not be able to answer.  And when you answer it, they move onto another point that they hope you can't answer.


The first time I entered the lions den that is WattsUpWithThat, I chose to pick on something I didn't really know about and ridicule Roy Spencer about it.  Not a good idea because he quickly corrected me and I just looked like an idiot, which is pretty much what I was.  I decided that I wouldn't argue with better informed deniers until I was better informed myself.  In far too many cases, that actually meant only thirty seconds research, such is the lack of quality in the average denier.  It wasn't too hard finding points that I could win against the rather dim James Dealing Pole and Anthony Watts.  It took a bit more before I felt confident to take on some more cunning deniers.


The downside of all this online argument is that time is taken to find out that an idiot is still an idiot, just thousands of miles away and fast asleep when I come up with my best stuff.  Because the denier is so entrenched in their denial, they won't respond to the brilliance of the argument with anything like an intellectual comment.  Oh, no.  They will have spent their time trying to come up with a fancy, witty comment that amounts (and often is) to "Yah, boo, sucks".  Those ones are beyond reach.


The upside is twofold.  Firstly there are those that can be won over.  They are less entrenched and willing to examine evidence, and have the intellectual skills to do so.  I don't mean they are any more intelligent, just that they have critical thinking skills that enable them to make sense of scientific arguments.


Secondly, researching debating points has educated me to the point that I don't care who I argue with now.  I am not an expert by any means, but I do have enough learning in climate science to be able to point to the evidence.  And that's the big point - evidence.


The denial side of any scientific argument usually decays into a conspiracy argument, that the scientists are all in the pay of the politicians who want to feather their nests with grants, backhanders or whatever.  By sticking to the science, the denier ends up looking stupid to outsiders, and probably quite stupid to an educated person on the inside too.  And as those educated people tire of arguing with jellyfish, they drift off and perhaps they do start to realise the science is reliable.  And that the planet is getting warmer.


I was lucky.  I was brought up with no particular ideology.  My parents were not especially religious (if anything, my dad worshipped Arsenal football club and my mum Emmerdale Farm) nor political.  Indeed, they both loved laughing at politicians and clerics and passed that attitude on to me.  I suspect if I hadn't found so much to laugh at when I was younger, I might have been collecting my deserved Nobel this coming autumn.  But I did gain something.  I gained a healthy scepticism.  I gained a set of critical thinking skills that I think aren't too bad.  They seem to do the job.


One of the least satisfying aspects of arguing with deniers is the repetitive nature of their arguments.  I'd master those several years ago.  Isn't it about time they threw in the towel or they found new arguments?  Well, the latter isn't going to happen.  They only have the former left.


And to return to Buzz Aldrin.  He got fed up of being harried by Moon landing deniers, so he punched one.  I haven't reached that stage yet (but the facetious comments of Richard Tol have given me cause to face palm with a bit too much force for my own good).
Posted by Catmando at 14:34