Did the BBC base Count Arthur Strong on Lord Christopher Monckton?

Significant similarities between the fictional character, Lord Christopher Monckton, and the former variety star and current subject of a BBC reality TV series, the eponymous Count Arthur Strong, have been revealed in an investigation into the well known left wing bias of the BBC.  It is so well known that we don't need to detail any of it here.

The similarities are too close to be described as anything but uncanny, though that has never stopped Lord Monckton from making a logical leap too many and allege a deliberate act.  So let's examine the evidence and, as ever, let the reader make up their own mind (though, of course, the evidence will be presented in such a way that no one will be able to do anything than accept my conclusions).

1.  The look
Monckton has been dressed in his fictional world in the tweeds and paraphenalia of the minor and not long established aristocracy. Strong dresses in tweedy clothes befitting his aspirations to be seen as a real aristocrat but who really can only trace his dynasty in the peerage back to 1947 when his grandfather was ennobled for services to appeasement. 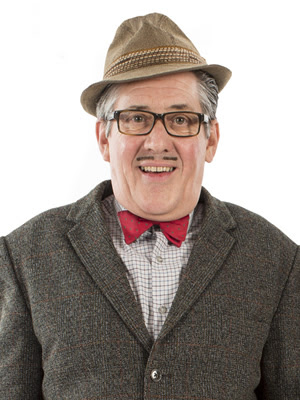 2  Mode of speech
Monckton's writers have given him a speaking style that means he says things that sound quite impressively intelligent but are actually gibberish. Watch this sketch from his ITV4 sketch show, The Christopher Monckton Half Hour.

Count Arthur Strong has a natural gift for talking nonsense, tripping over his words and making malapropisms, in spite of his eminence as a variety performer and actor (he narrowly lost out to Sean Connery for the role of James Bond in the early sixties).  But amongst it all he has the natural charm of someone who is descended from a long line of two preceding Count Strongs.


3 The Politics
I think it is impossible to discount this piece of evidence.  The two are identical, politcally.  Here is that evidence.  Read this spoof article from the website, BatShitCrazy.com, a satirical website hosted in America where the craziest and most stupid ideas are presented as if they were true.  Here, the writers behind Lord Christopher Monckton, have come up with a hilarious article that would be good enough for Punch, were Punch still a going concern.  To give you a flavour, let me quote a paragraph.  I am sure you will get the point:

The madness of the governing class has now infected even the normally quite sensible British courts. For 1,000 years, the High Court in London has been dispensing (or, depending on your point of view, dispensing with) justice. A few years back, it decided to rebrand itself the “Supreme Court.” Next year, no doubt, it will be calling itself the “Pangalactic Court.”
This normally staid and sensible body of custard-faced judges has now joined in the collective madness that is the global-warming scam. Lord Carnwath, a rabid environmentalist who has much the same opinion on climate change as Prince Charles (in a word, flaky), recently held an international conference of lawyers and judges on the theme of ganging up together to prosecute, convict and imprison scientists and researchers who, like me, commit the crime of conducting diligent scientific research and publishing the results in the learned journals from time to time.
In the future, if Lord Carbuncle gets his way, an inexpert panel of international judges will review our research and pronounce on the extent to which it conforms to the climate-communist party line he so passionately espouses. Those of us whose research dares to point out, for instance, that the data show no global warming for approaching 19 years even though one-third of man’s supposed warming influence since 1750 has occurred over the same period will be found to have committed truth-crime and we will be locked up.


4  Current career
Lord Monckton's writers have given him a career of going to small halls and giving illustrated talks to bored housewives and those sheltering from the unseasonably extreme rainfall and/or heatwave.  The writers expect us to see his failure to live up to his ambition to be a scientific expert, legal expert and stand up comedian with the sympathy you normally reserve for those that have tried but failed and as still in reception class at infants school.
Strong earns his living these days, since no one will seriously employ him as an entertainer, giving talks about his heyday on stage and TV pilot shows.  You might notice that no one laughs at the jokes which fail miserably and we are asked, in the BBC reality show that follows him around with a camera crew, to be sympathetic to this rather lonely and sad character.

It is clear, then, that the BBC has based its reality series on the celebrated variety star and film and TV celebrity Count Arthur Strong on the fictional life of the bat shit crazy Lord Christopher Monckton.  Case closed.  Except to point out that "Lord Christopher Monckton" needs to be put into quotation marks.  It's what he would have wanted, if he existed.
Posted by Catmando at 12:15