The late, great Carl Sagan was a hero to many.  This is hardly a surprise.  He was charismatic, highly intelligent and spoke of some of the most wonderful and awe inspiring things in nature - Mars, life on other planets and so on.  He made one of the greatest and most influential TV documentary series of all time, Cosmos, which was recently successfully updated for a new century by Neil DeGrasse Tyson. 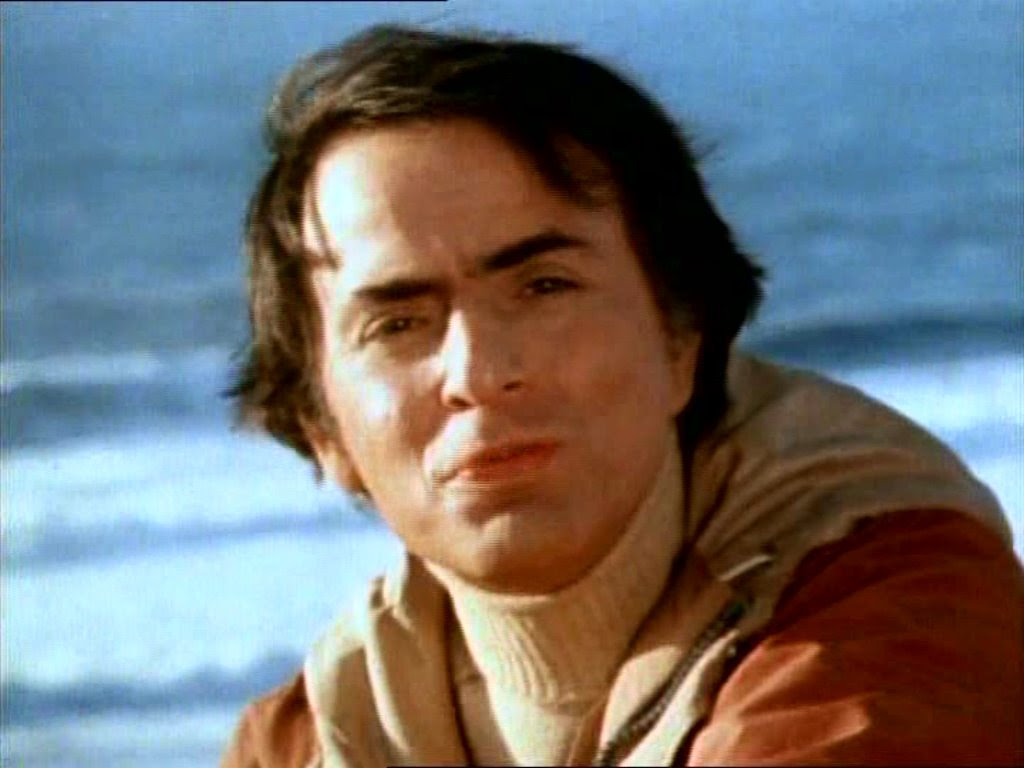 For example, Judith Curry did a post on the Baloney Detection kit on the occasion of what would have been Sagan's 80th birthday.  Jim Steele, a noted denier, brought Sagan up in a WattsUpWithThat post in December.  It is interesting how the fake skeptic movement likes to clothe itself in the genuine skeptic movement and uses as a semi-sacred text someone who would have laughed in their faces.

Let's examine what Sagan meant.  In the chapter, he gives a list of some of the tools ("Among the tools...) that a sceptical mind can make use of.

Wherever possible there must be independent confirmation of the “facts.”

Multiple lines of evidence pointing to the same conclusion are good.  A small coterie of like minded mates asserting the same thing isn't.  And when someone says your conclusions are no good, independent verification is needed.  I don't know how many climate scientists there are in the world but I am prepared to bet that those in the 97% outnumber those in the 3%.


Encourage substantive debate on the evidence by knowledgeable proponents of all points of view.

Well, that's what happens at scientific conferences and through the publication of genuine scientific papers.  I am not sure we can agree that non-scientist Christopher Monckton, for example, acts to encourage substantive debate.


Arguments from authority carry little weight — “authorities” have made mistakes in the past. They will do so again in the future. Perhaps a better way to say it is that in science there are no authorities; at most, there are experts.

Science proceeds according to the evidence, not who said so.  In the climate denial world there is a strange anti-expert view.  Because Michael Mann said so, they reckon, it must be wrong.


Spin more than one hypothesis. If there’s something to be explained, think of all the different ways in which it could be explained. Then think of tests by which you might systematically disprove each of the alternatives.

This is crucial to the idea of scepticism.  Fake skeptics love to give one hypothesis and don't admit of any others.  In science, just as Sherlock Holmes said,  when you have excluded all the other possibilities, what remains is the truth.  At least until some more evidence is found.


Try not to get overly attached to a hypothesis just because it’s yours.

Deniers do this so much.  Real scientists do it too but real scientists know what happens when you get it wrong and will do what they can to avoid that possibility.  The fake skeptics don't care.


Quantify. If whatever it is you’re explaining has some measure, some numerical quantity attached to it, you’ll be much better able to discriminate among competing hypotheses.

That's why we measure things, like temperature, CO2 levels, sea levels, sea ice extents and thicknesses and the like.  The numbers give us a way to discriminate and there are statistical tests that enable us to compare with some sort of confidence.  This does not mean, however, that numbers can get tortured in order to extract from them what you want, or that some results can be ignored just because they don't confirm your conclusion.  In the UK, part of the skeptic movement has put its energies behind a campaign called AllTrials intended to secure the publication of the results of all clinical trials. Curiously, some parts of the alternative medicine world are not signatories.

If there’s a chain of argument, every link in the chain must work (including the premise)—not just most of them

Now this is where the fake skeptics fail.  Every link.  Every link in the chain must work.  With climate science, even though it is complicated, there are plenty of links in the chain that have been fully verified and to deny any of them is just stupid.  Yet that happens.  Similarly with vaccinations - lots of research, huge piles of knowledge confirm that effectiveness of vaccinations yet there are still those that will deny this.


Occam’s Razor. This convenient rule-of-thumb urges us when faced with two hypotheses that explain the data equally well to choose the simpler.

Isn't this where conspiracy theories go wrong?  To maintain the conspiracy, you have to keep adding layers of explanations that usually don't have any evidence or the evidence is open to simpler interpretations, often as a result of the ignorance of the conspiracy claimant.  Did we land humans on the Moon?  The simplest explanation is that we did.  To add layers of difficulty to the available explanation just makes the conspiracy more and more implausible.  Climate science deniers try the same trick - the word fraud is bandied about a lot.


Always ask whether the hypothesis can be, at least in principle, falsified.

Human driven climate change is falsifiable.  If CO2 levels keep increasing and all other factors remain the same, falling global temperatures will falsify the premise.  It isn't a likely outcome.

I haven't said anything new here.

But it is perhaps ironic that the deniers should have taken on the clothes of one of the most famous scientists on the planet, one who did much for the promotion of environmental concerns.  I didn't have to look too far to find this video, of a talk Sagan gave in 1990, in which he labels the deniers as such.

Sagan studied the greenhouse effect on Venus.  He did know what he was talking about.  He was concerned about environmental topics.  He was an advocate who spoke his mind and spoke it eloquently.  In other words, he is exactly the last person that deniers would have on their side.  And he would have avoided them.

Actually, I don't really think Sagan would have avoided them.  He would have patiently explained why they were wrong.  He would have provided evidence and explanations that they could have clearly understood.  He had already done so, in Cosmos.


And if they really cannot accept that, there's always the edited for rednecks version:


In the meantime, buy Cosmos on DVD: