Deniers crying in their beers

I'll give Jim Steele his due.  He is the first denier I have ever seen come up with perhaps the most important Richard Feynman quote of all:


[There is an] idea that we all hope you have learned in studying science in school—we never explicitly say what this is, but just hope that you catch on by all the examples of scientific investigation. It's a kind of scientific integrity, a principle of scientific thought that corresponds to a kind of utter honesty—a kind of leaning over backwards. For example, if you're doing an experiment, you should report everything that you think might make it invalid—not only what you think is right about it; other causes that could possibly explain your results; and things you thought of that you've eliminated by some other experiment, and how they worked—to make sure the other fellow can tell they have been eliminated.

I've crossed the first bit out because Steele doesn't use that.  You can check here (archived).  You can also see that he didn't bother with the next paragraph:


Details that could throw doubt on your interpretation must be given, if you know them. You must do the best you can—if you know anything at all wrong, or possibly wrong—to explain it. If you make a theory, for example, and advertise it, or put it out, then you must also put down all the facts that disagree with it, as well as those that agree with it. In summary, the idea is to try to give all the information to help others to judge the value of your contribution, not just the information that leads to judgment in one particular direction or another. [Feynman quotes from here]

Perhaps there is a reason why he didn't bother with the second paragraph but it is an important one.  I can't remember ever seeing a post proposing something at WattsUpWithThat actually doing what Feynman says here.   Give alternative explanations.  But, wait, deniers can't do that because the people reading their denialist thinking might actually see that the consensus view is the right one.

And that will never do.

Steele's article is a crocodile tears exercise in whinging.  Steele is moaning about the US TV series Years Of Living Dangerously which we in the UK have yet to see, although you can see episode one at the show's website.

Deniers won't like the series.  It is aiming to tell the science of climate change through human stories.  It may not entirely succeed (I can't know from just seeing one episode) but it is important that the science is heard loud and clear.  Alongside Cosmos, the updated remake of the classic Carl Sagan series, there is a two pronged attack on anti-science.  Not surprisingly, Steele doesn't enjoy his current viewing.

Well, tough.  We get Cosmos here in the UK and it is both excellent and something surprising.  Cosmos is rather tough on deniers.  The story of how leaded petrol became unleaded petrol is less familiar a tale of science denial than those of climate, cancer or tobacco, but it is illuminating nonetheless.  Steele and his Watts hosted clique probably didn't enjoy that episode.  Good. 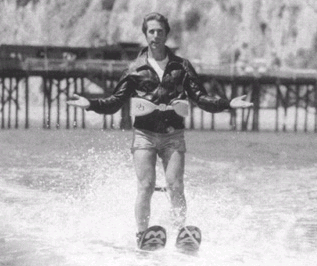 You know that Jim Steele has jumped the shark when he adduces Pastor Rick Joyner to his side.  Joyner, according to Steele,  "embodies Albert Einstein’s advice to “Never Stop Questioning.”"  That's hilarious.  Joyner is an adherent of dominion theology which aims to have government on Christian grounds according to Biblical law.  I suspect Joyner has stopped questioning that one.  For more Joyner fun, click here.

Steele's moan seems to be that the producers didn't make the TV show that Steele wanted them to make:


If the documentary wanted to educate the public about the best practices of science, they would have examined all the facts including well know water management practices. But only Pastor Joyner seemed willing explore such alternative viewpoints. The producers’ efforts would have done more good, if they had tried to enlist the pastor’s influence to promote better watershed management. But the producers seemed intent on bending over backwards to suggest recent droughts were unnatural and caused by rising CO2. But our best scientists do not support that suggestion either.

Is Steele that naïf?  Maybe so.  He has hitched his wagon to Anthony Watts so there is an element of naivety.  Steele must surely be aware that the producers made exactly the sort of programme that they wanted to make.  They have a point they want to get across, a way they want to make that point and they get on and do it.

Perhaps Jim Steele won't mind if I have a moan about Glenn Beck.  Could he not, just for once, explain that there are other explanations behind his right wing rants?  You know, he could show the other point of view.

Only kidding.  I'm not stupid enough to think that a 45 minute long episode has the time to do everything Steele would like it to do.  Besides, the majority of the people watching are taking in the human interest side.  If they want to look at the science, they can find it elsewhere.  Many of them will already be aware of the science and will have joined the consensus.  Science programmes don't draw vast audiences.  You can bet The Big Bang Theory gets more viewers (and Jim is moaning that not all nerds are like those portrayed in the series and they should introduce a character more like the nerds he used to hang around with - or perhaps....)

Interestingly, Steele questions the BEST data.  You might be aware that this was the denier funded, denier backed, denier promoted last gasp at showing there really was no climate change project that, ha, ha, showed that climate change is genuine.  Anthony Watts himself said he would accept the result whatever it said.  Until it was published, of course.


Instead of discussing all the science, the producers try to bludgeon Pastor Joyner with Christian peer pressure beginning with his daughter. Then Katherine Hayhoe visits and repeats the same simplistic arguments from episode 1. Then former U.S. Representative Bob Inglis piles on. Finally Pastor Joyner is brought to Dr. Richard Muller who has been hailed as the Koch-brothers-funded skeptic who now believes in CO2-caused warming. But the producers fail to mention that Muller’s homogenized instrumental data may suffer from the same biases illustrated in “Unwarranted Temperature Adjustments: Conspiracy or Ignorance?.” Or contrasting satellite data that shows the global average has not risen in 17 years.

I've removed the links.  The second one is in quotation marks and links to Steele's own site.  He needs a proof reader.  The page linked is aimed at educating students as it has three critical thinking questions (though a leading question like the first one is less critical thinking than guided study):

1. Does categorizing a weather station as rural mean human landscape changes have not increased the local temperature?
2. Why are minimum temperatuers more sensitive to local land surfaces?
3. Why would a rural station that has never changed location or instrumentation have its data adjusted?

Remember that Feynman quote.  In trying to make a case, Steele doesn't follow Feynman.   The "contrasting satellite data that shows the global average has not risen in 17 years" is this:
A couple of things - satellite data is not the only source of information about temperatures available.  What story do the others tell?  Secondly, any trend of exactly 0.00 should ring bells.  Especially as this graph keeps growing longer and longer, just like Pinocchio's nose but the trend keeps on at 0.00.  Natural phenomena don't do that.  What's going on?  Does anyone know?

On one thing I can agree with Steele:


We are all blinded by our illusions and we can only free ourselves from those illusions by careful observations, experiments and respectful debate.

I contend he is blinded by his illusions.  He admits his Christian past but I am not sure he understands it:


Abraham’s willingness to sacrifice his son to be closer to God is religion’s equivalent of Feynman’s ideal scientist who leans over backwards to prove that he has not been fooled by clinging to a cherished belief.

And the Golden Rule (of reciprocity) is common to every religion and older than both Christianity and Judaism.

But back to Steele's article.  One can delight at the hypocrisy:


Accordingly climate alarmists have circled the wagons and refused to debate with climate skeptics, preferring hit pieces such as Years of Living Dangerously.

And the deniers don't do hit pieces like, for example, Steele's one.  But there you go.  And the reason why climate scientists don't debate the deniers - you only have to see Lord Monckton's mendacious presentations to realise that all the denier has to do is sew doubt.  And science isn't settled by debates.  And debates are a game.  It isn't rocket science, Jim.


I suggest they will be better scientists if they emulated Pastor Joyner, and listen to all sides, promote more debate, and then let the truth lead us wherever it may.

As Pastor Joyner himself says on his Facebook page:


Today, there are basically four worldviews: The Christian worldview, Islamic worldview, secular worldview, and the Marxist worldview. Each of these in their pure form is in basic conflict with the others. If you understand these worldviews, you will have a basic understanding of virtually all of the conflicts in the world today.

Just letting Jim know that Joyner doesn't have a clue.  15% of the world are Hindus.  That's 1.1 billion adherents.  Bhuddists make up more than 500 million people.  In Joyner's mind there might be four worldviews.  In mine there are dozens.  Question everything?  Yeah, right.   And Marxist worldview.  What century is he living in?

PS  Jim has a nose for these things and will probably appear in the comments.  I shall listen but anyone who takes Rick Joyner seriously needs a good argument to convince me of anything.  If you come here and say the sky is blue, I shall need to go outside and check.  As one of the comments at WUWT points out


Unfortunately Rick Joyner in other (more important areas such as Christian doctrine) is a fruitcake.