And then there's hypocrisy

I have been rather slow to catch up on this but since it seems to be going exponential, perhaps it is time for me to weigh in.  So, get ready, Willard, here's next week's quote of the week (modesty set aside for the moment).  If you've got your intelligent hat on, you might be able to find it.

A bit of background.  Lawrence Torcello, the sort of person that Willard is likely to be envious of, wrote an article at The Conversation with the title "Is misinformation about the climate criminally negligent?"  Since just about every climate change denier won't have read beyond the title, they won't know that the answer is "perhaps, maybe, not sure".  Torcello is far too brainy to be so dogmatic.  His key paragraph is the penultimate one:


My argument probably raises an understandable, if misguided, concern regarding free speech. We must make the critical distinction between the protected voicing of one’s unpopular beliefs, and the funding of a strategically organised campaign to undermine the public’s ability to develop and voice informed opinions. Protecting the latter as a form of free speech stretches the definition of free speech to a degree that undermines the very concept.

It is not the curtailment of free speech he is asking for, but the curtailment of a deliberate misinformation campaign.  The sort of campaign run by the tobacco industry in the United States over several decades.  If you don't believe me, read Merchants Of Doubt by Naomi Oreskes and Erik M Conway. 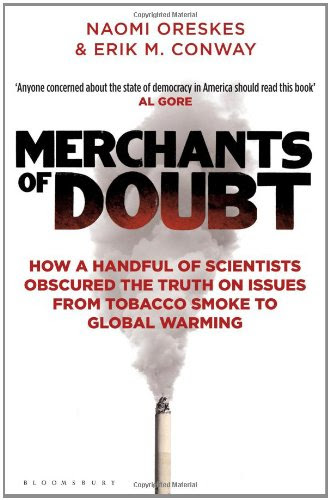 Anyway, as expected, the denialati picked up on the article and, as ever, their reading comprehension deserted them (if they ever had it) and they got the wrong end of the stick.  Not a surprise there.  If you read Sou's take on this you can get a flavour of how wrong and how vile the deniers can be at moments like this.

Deniers, for some reason, are incredibly thin skinned.  They are thick, as in unintelligent, but that goes without saying.  But prick them and they scream.  Any slight, no matter whether it is real or not, will result in screams of agony.  And, lo, it came to pass that they went into full hysterical mode.  Given the green light (in the typical plausible deniability way that Willard uses) by Watts on his site, deniers have been going hammer and tongs at proving Lewandowsky correct - they really do see conspiracies.  I can't prove that it was the attack dogs from WattsWrongWithThat that have been responsible for the reprehensible insults hurled at Torcello but it would be a surprise if none there had tried to put the boot in.  For a bunch of people who get touchy at the word denier because they think it is exclusive to Holocaust deniers, the comment that climate change was:


“A LIE STRAIGHT FROM THE JEWS”

just tips my hypocrisy meter over the limit.

So with wonderful hypocrisy, Watts suggested any complaints follow his instruction:


If you choose to lodge a complaint, be sure to be courteous and factual, we don’t need to surrender the moral high ground to anger.


Of course, anything like this is like a red rag to a bull and the biggest purveyor of bull is Lord Christopher Monckton, 3rd wotsit without a seat in the Lords of Brenchley.  You know how it goes.  Write letter of complaint at great and tedious length in words that could be better deployed in a Lawrence Durrell novel and then, well usually nothing.  Old Chris is rather good at the first bit but it all sort of fizzles out after that.  Not for him a second firework.  Oh, no.

Amusingly, of course, since this is Monckton we're talking about, he chose to ignore Watts's injunction to be "factual".  Courteous, insofar as Monckton is courteous (he has an educated slyness about him) but factual he isn't.  When confronted with the errors in his presentations, be they talks or written, Monckton does not bother about correcting his mistakes.  He merely continues making them.  I can't see a University taking their direction from this dunderhead.

If you don't believe me, do what real skeptics do.  Check the facts.  Here is a Potholer video that does that checking for you:

So I can't expect the Rochester Institute Of Technology where Torcello works will be lectured to on matters of the truth by serial dissembler Christopher Monckton.

It would appear that climate change deniers just don't understand hypocrisy.  Just don't understand the English language very well at all.  Perhaps that is why they are so impressed by Monckton's florid but vapid outbursts.  It is hypocritical that Watts has deleted comments on religion while allowing Monckton to post his Christmas message to his flock in December, or to allow countless comments along the lines of AGW is religion.  If he is doing all this for free then he sells himself too highly.  If Watts has a consistent policy then I'd love to see him outline it.  My comments are free.  I don't delete anything that isn't spam.  I don't even have a comment policy.  Say what you want.

I began thinking about this post when I read Monckton's drivel.  I firmed my decision when I read AndThenThere'sPhysics post entitled Climateball(TM).  It is further evidence of the hollow nature of climate change deniers.  Anders has tried to be as fair and as polite to all sides as possible.  I don't know the blogger but I have detected a growing weariness that, no matter how polite, how fair, how honest and how patient, arguing with a denier is the equivalent of nailing a jelly to a wall.  You end up with a mess, a stain on the wall to remind you, lots of holes and nothing achieved.  The reason is simple.  Deniers don't want to know the truth.  They are not interested in the truth.  They just want you to know that not only are they ignorant, but loudly and persistently ignorant.  After all, they, like me, could just read the truth.  It is out there.

But some people just don't get it.

Update
Someone tweeted this to underline the hypocrisy of some: