Why do science part 2

It might be churlish to say so but there must be a large number of people who forewent their science amongst the 1200 or so people who queued up to have the MMR vaccine in Wales in the last day or two.  Surely not every one of them forgot, or decided that something was more important that day.  Actually, since the majority probably didn't get to make the decision for themselves, the chances are that there are a lot of guilty parents in the queues, or am I making too many assumptions.

For a good many people one of the problems of science seems to be that it is just too good at finding things out.  It is fine to discover a new species of spider because that just adds to the gaiety of life.  Finding something that challenges basic understanding of how things are, that's different.

The matter of vaccinations is interesting because it illustrates how science has opened up a gigantic chasm between how the world was and how the world is now.  In the developed world, with health systems and ample food, clean water and energy on tap, we don't notice what a rotten world it actually is.  Yes, we moan about the unfairness of things, especially when someone young and seemingly in their prime is cut down by disease, but those things are so much rarer than they were even one hundred years ago. 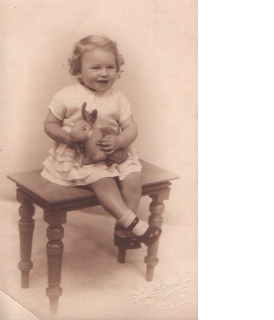 When my mother was five, she spent several months in hospital with scarlet fever.  I don't think I've ever seen anyone or known of anyone who has suffered scarlet fever in my memory yet my mother would speak eloquently of the isolation she had to put up with in the hospital to prevent infecting anyone else, how here mother and father had to wave at her through a closed window when they came to visit.  But conditons, in a working class part of Preston, Lancashire, were very different then to what they are now.  Take the picture below, of my mum and a friend sometime in the 1930s.  Do we see anything like that these days? 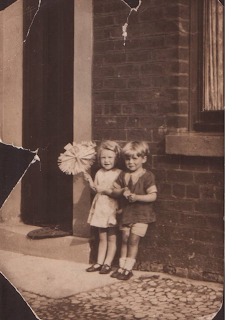 So many parents feel that the diseases of their childhood, which generally they passed over without too much trouble or perhaps never even got, weren't too bad.  Problem is, they are.  Of the 600 or so who have got measles in the Welsh outbreak, statistics predict at least two will suffer serious complications and perhaps even die.  That's not a pleasant outcome, and totally preventable.  Vaccinations have been demonstrated to be very effective and, just like crossing the road, the risk is manageable.  I might not feel that way if it is my child that has a complication from a vaccination but since I personally have had such a complication, I might be able to comment.

I had a sore arm after a tetanus injection.  Not much, nothing major and not life threatening, but it is a complication.  As the lengthy list of side effects on the average leaflet inside a packet of pills might alarm, so does the idea that vaccinations can cause problems.  But the vast majority are straightforwardly the same as if someone has merely stuck a pin in your arm.  It is sore.  Serious complications are very rare.  Sadly, the googlesphere is swamped by the antivaxxer sites so getting the real numbers is the work of serious archaeology.

Back to my point.  Science can tell true results from the noise of rubbish that envelopes us.  That's why it is so useful and so good at its job.  And that's why people should understand it and not just the pile of facts it brings but the reasons why we can know those facts.
Posted by Catmando at 13:15