If I were asked for the identity of my favourite organism, I might be tempted to say slime moulds.  So, hands up all those who have heard of slime moulds.  Hmm.  Thought there might not be too many hands.

There's a reason for that.  Slime moulds just aren't famous.  They don't have any PR, unlike the tasty or toxic mushrooms, the annoying pin moulds and the ubiquitous yeast.  But then slime moulds aren't moulds at all, because they aren't fungi.  They are protists, single celled organisms, and can grwo very big for microbes.  Some slime moulds occupy an area of several square metres and have a mass of up to 30g.  Look for them on fallen logs where they chomp on the bacteria that are part of the decay process and look like brightly coloured slime patches. 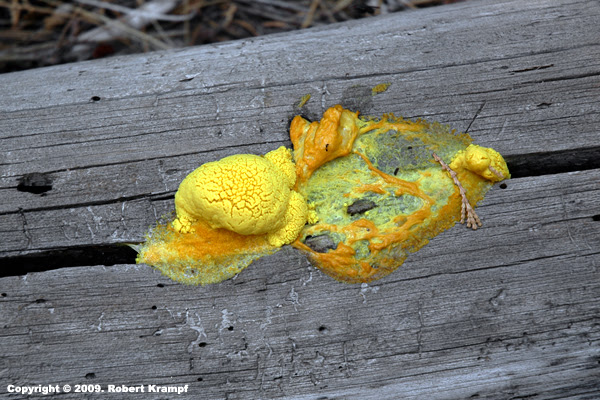 The reason I love slime moulds is because they are just so odd.  Most people now no longer encounter nature so readily as they used to.  My family, for instance, had never seen a weasel until we saw one while visiting my mother's grave one day last year.  For city dwellers, wildlife is often birds and foxes and little besides.  That's a shame but I was brought up to turn over logs and stones to see what was beneath, and I spent a summer investigating the ponds and streams around my village, mostly in search of my second favourite life form, the planarian flat worm.  But slime moulds are odd.

Some of them consist of a single cell with hundreds of nuclei.  Sometimes they group together to form a slug-like entity that moves away and forms a fruiting body that releases spores.  So there is an element of multicellular life in there and the evolutionary importance of such behaviour has not been lost.  Not that we have entirely worked out the evolution of these things.

I first came across slime moulds when I met the UK's chief scientist of the time, John Ashworth, through his eldest daughter.  She loaned me his slim book on slime moulds, The Biology Of Slime Moulds in the good old studies in biology series that Unwin published in the sixties and seventies.  I read the book as a sixteen year old then bought my own copy when I visited Nottingham University a couple of years later.  I have since lost the book sadly.  It's not much of a read but it's not meant to be.  It is an overview of what was known about these strange creatures at the time.  I could get it for a penny at Amazon if I wanted.
Perhaps the most interesting thing about slime moulds is that they can solve puzzles like mazes in a most efficient way.  All in all they should have better PR.

Anyway, look under or on logs in the future to see if you can find some slimy looking patches.  They might be slime moulds.
Posted by Catmando at 02:20