In a moment of solidarity, I have added the blog Watching The Deniers to my list.  So up the workers, freedom for Tooting and power to the people, right on. 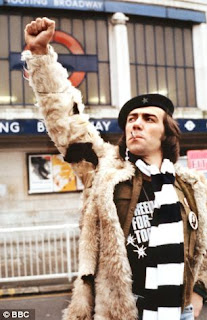 The reason for my fraternal support is simple: the Watts Up With That crowd took displeasure at a post, since corrected, suggesting that Anthony Watts was a bit on the mendacious side.  Currently the article is entitled: ANTHONY WATTS: IT IS NECESSARY TO USE THE CORRECT SEA-ICE GRAPHS ON WUWT TO AVOID MISLEADING THE PUBLIC but it has evolved over the course of the day and the comments reflect this.
The response is what interests me.  Willard felt libelled so he fired off some angry responses and the pet alligators who comment on WUWT circled in their pool sensing blood.  Strangely, their comments reveal a lot of the mendacity that climate science deniers like to use.  That and threats and ad hominem accusations and juvenile insults.

AndyG55 says:
July 7, 2013 at 8:32 pm
Pretty weak sort of site.
The owners don’t seem to even have the guts to put their names up anywhere, let alone any sort of qualification.
Basically a bunch of non-entities !
John Cook’s boy friend , perhaps ??

So, not putting a name to your work is pretty weak.  Like Abzats and his fantasy on peer review. And John Cook's [of SkepticalScience.com] boyfriend - pretty cheap that one.

Let's remember that sock puppers are banned at WUWT, except when they are Dave Stealey, aka Smokey.
Here's more fun (my bold):

Eric Worrall says:
July 7, 2013 at 11:06 pm
Unite Against Greenfleecing
I hope Mariott thanks you for the traffic to his site. He will get more traffic in one day from WUWT than he probably gotten in all thw time the site has been launched. WUWT, making alarmist dickheads famous, one idiot at a time.
If you don’t challenge liars, their lies don’t get challenged. Yes there is an issue of drawing attention to alarmists, but WTD gets a fair bit of attention anyway. Exposing their malice and incompetence to ridicule at least allows people to see them as they truly are.

Let's be very charitable and say that no one ever lies on WUWT.  Economical with the truth, perhaps, but not lying.  We never did hear what happened to the Heartland delegation in China.  Presumably the Chinese stood them up. But when mistakes are pointed out, and they are repeated, it is difficult not to call it lying.  It is typical denier behaviour - to ignore the truth, to bury your head in the sand, to put your fingers in your ear and go "la, la, la" - definitely not to admit the mistake unless you can help it.  Disappear the post down the memory hole, like one on Greenland ice a few week's back.

Ignoring Worrall's tautology, there is a sweet irony here.  Challenging the misinformation at WUWT does not meet with a charitable reception.  It meets with insults, snide comments and more.  Willard has named and shamed some who have had the temerity to claim that black is black and white is white, unlike our denier friends who abuse science and maths to further their own ends, whatever they might be.  Watts and his cronies are occasionally very malicious.  I've been down that line and I shall not bother again.

A use of the D word that doesn't get snipped:

Mark says:
July 7, 2013 at 11:37 pm
I wouldn’t hold my breathe waiting for a reply. Mike can his various lap-dog regulars live in a parallel universe where they are never wrong and ‘deniers’ are never right. And Mike’s activist approach to comments ensures that anything that shows him or his pals in error is ‘appropriately’ dealt with.

Once again, the irony is overpowering.  Deniers cling to their cherished pseudofacts for as long as they possibly can, repeating the claims long after they have been debunked or making weak claims about peer review.  And I thought the word denier was banned at WUWT.

geoffchambers says:
July 8, 2013 at 12:14 am
Mike Marriott is co-author, with John Cook and Stephan Lewandowsky, of the Recursive Fury paper which accuses Anthony Watt and others of conspiracist ideation.

Watts certainly doesn't snip comments of a conspiracist nature and there are plenty of accusations flying around on WUWT about fraud and conspiracy amongst climate scientists so it is hard to deny that accusation, even if it is true.  A simple way to avoid it would be for Watts and his moderators to challenge any conspiracy comments but they do not. Watts and his chums certainly bristle when they are challenged.  Out come the threats of legal action (Monckton is good at that, but his lawyers are probably starving because he doesn't seem to follow through with that very often, and his fight with the BBC didn't turn out too well).  And we should not forget that deniers are quite keen on throwing around unevidenced and unpleasant insults - climate scientists are perpetrating a fraud, a conspiracy and so on - without worrying about any consequences.

My last post contained my belief that Watts can be considered to act in a hypocritical manner.  Today's actions just reinforce that.  With my concern troll hat on, Watts could seriously do himself some favours by ridding his site of the conspiracy trash (although that would mean Monckton going down a hole amongst others) and being a bit more scientific (how about some references in more of the posts, discussions of possible errors and evaluations of the reliability of the conclusions rather than being quite so definite?) and actually reading the submissions first.  If he does read them, then read them twice before posting.  There's a lot of rubbish on that site, lots of easily debunked stuff that those with better qualifications at than me get down to doing.

Finally, take this, brother, may it serve you well.