I was looking at some bits and pieces that I wrote both twenty years ago and thirty years ago.  What I had done was write a rather detailed account of two years in my life and incorporated into it scraps of things that I had written at the tail end of my school career and the first two years at university.  I might reveal some of the contents but suffice to say that the two years marked my putting away childish things and growing into manhood.  I had come from a small village and been educated in a provincial town, so my journey into adulthood was partly precipitated by going to live in Lewisham, of all places, at the age of eighteen, to study at Goldsmiths College. 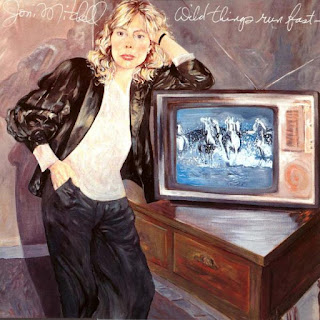 Virtually midway through my time there I moved from digs into one of the halls of residence.  At effectively the same time I got into Joni Mitchell's music in a big way.  Luckily I was alert enough to get a ticket, way at the back of Wembley Arena, to see her on the tour that she did to support Wild Things Run Fast, her 1982 return to poppy songs album.  This was my open door to her music.  Previously, by a couple of months, I had bought Ladies Of The Canyon, played "Big Yellow Taxi", then put the album away.  It didn't talk to me in the way I had hoped.

At the time I was listening heavily to Bob Dylan.  Over the previous few months I had gone through Blood On The Tracks, John Wesley Harding, Planet Waves, Desire and finally Street Legal.  In the whole of 1981 and 82 I had gone through Paul Simon's back catalogue (at least the bits that I could get hold of then) like a dose of salts.  I was a sponge, had the energy and desire to absorb the music and appreciate both melody and lyrics.  In those two years I went from ELO and Fleetwood Mac to Joni Mitchell and Neil Young via Jefferson Airplane and The Byrds.  I felt I had grown up and that is shown by the things I wrote at the time.  There is a tangible air of the eighteen year old country boy turning into a twenty-one year old city man.  I enjoyed my time in Lewisham.  I must go back to visit one day.

I bought Wild Things Run Fast having heard both "You're So Square" (the old Elvis song) and "Chinese Cafe" on Radio 1.  I suspect they wouldn't dream of playing Joni Mitchell any more, but in those days you could hear a great deal of mature music not aimed at the top 40, not so ephemeral either.  I was impressed one Sunday to hear the B-side of the then current Abba single "The Day Before You Came", the infinitely more interesting, to me, "Cassandra".  Anyway, I bought the album on January 4 1983, on casette, from Woolworths.  I heard it first at a friend's house, waiting for my then girlfriend to visit me.  I didn't play her the album as it wasn't her kind of music.  Nor was Dylan.  She preferred Cliff Richard but she did, strangely, have Pink Floyd's The Wall in her modest collection of tapes so it was from her that I gained my love of Pink Floyd (though not Cliff, funnily enough).

At the time we were in the process of breaking up.  So that day was her last visit to my house.  I don't recall what we did that evening.  It probably wasn't arguing because we didn't do that, just fell apart.  Luckily, I had loaned my tape of Blood On The Tracks to someone over the Christmas holidays, otherwise I would have played that one to death.  Who knows how many times I would have slipped deeply into depression listening to "If You See Her, Say Hello".  No, Wild Things Run Fast was sufficiently upbeat not to drag me down into the black depths.  And when I got back to University, well, everything changed.

One thing that changed was that I now moved in a new circle of friends.  One of them, who I called Eugene was properly called Martin Klucowicz, introduced me to his friend Robin who played Hejira to us.  From that moment I knew I had broken into appreciating Joni Mitchell, not just listening.

Wild Things Run Fast contains a song that everyone should hear: "Chinese Cafe".  It is elegaic, with a swirling, climactic chorus and pieces of the classic (and perhaps overdone) "Unchained Melody" built into it.  It also reveals, for what I think was the first time, that Mitchell had had a baby in the sixties that was adopted.  The song "Little Green" on Blue (1971) was about this girl I believe.  Luckily in the 90s, Mitchells mother and daughter were reunited.

My own personal tale did not end so well.  My girlfriend and I split a fortnight after I bought this album.  I got my copy of Blood On The Tracks back.  I was thoroughly miserable for a while.  For her, things went more happily.  She left me for the man she eventually married and I am happy that she did.  I took a little longer to find my wife and I wouldn't swap her for anyone.  Even though she doesn't like Dylan or Joni Mitchell either.
Posted by Catmando at 13:53