Go on, rack your brains and tell me you know what you were doing at exactly that time on that day.

Thought you might.  It's nearly 44 years ago and let's face it, you've been asleep since then (or you weren't born, in which case there is a valid excuse).  But I know what I was doing.   I was holding one of these: 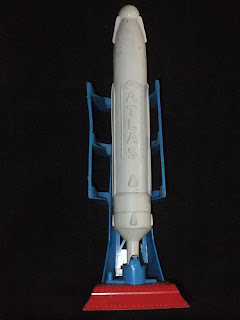 It is a model of the Atlas rocket on a spring loaded launch pad.  The rocket was hollow plastic and, you will note, has a rounded end designed to protect sensitive young eyes.  I was holding it because I had noticed something similar on the TV.

The launch of Apollo 8.  Sadly the BBC coverage is gone, so here is the ABC (American) version which is about as close as we can get.  For a precocious five year old interested in things in general, the idea of anyone going anywhere near the Moon was fascinating.  Not that I understood much about what was really happening.  I was more interested in Teddy Bear comic (5d every Thursday) and the comings and goings at Pogle's Wood  at the time, but the sight, in black and white, of this immense rocket lifting off on a dragon's tail of flame caught my imagination unlike anything else I can remember.

1968 was the year I started school.  I had been briefed by mum on how to behave but mostly that wasn't necessary as I was always well behaved, never a rebel and one who conscientiously sat down to work or got my nose in a book.   I remember learning my alphabet and starting on the Ladybird reading scheme and being jealous of those that had got three or four books down the line before I joined.  I was soon catching up, sort of, because actually I was, and always have been, a somewhat slower reader than I felt I should be.  Same went for writing, but I blame that on being left handed.

In some ways it was the end of innocence.  Gone were the days when I could go across the road to play with our American Air Force family - they had returned to Texas andleft us with some memories and a garden swing upon which I would spend many a relaxed and thoughful hour.

There are a couple of things I remember about Christmas 1968 outside of Apollo 8.  One is the red toy piano I got as a present.  I loved it and although I have loved music for much of my life, my entire musical talent began and ended on the single octave that that toy possessed.  Try as I might over the years, I just don't have any musical ability whatsoever.

The second is a pair of things really.  Two songs, "Ob-la-di, Ob-la-da" by The Marmalade and "Lily The Pink" by The Scaffold.  The former was the one I loved and played along with on Top Of The Pops, the latter one that I loved enough to be fully envious of whaen my brother's best friend said he had it on a single.  I didn't realise at the time how closely the two songs were related - each had a McCartney in the writing credits.  For old times sake, here they are:


I never bought either song.  Eventually I came across The Beatles version of "Ob-la-di, Ob-la-da" and was surprised it didn't sound like The Marmalade's version.  Not a big surprise really, because they had used the unreleased first version that The Beatles did.

I got to meet one of the astronauts from Apollo 8, Jim Lovell, a few years ago.  Lovely man, still with a twinkle in his eye betraying his sharp intelligence behind the avuncular front.  I still reckon what my dad told me was a magical truth: the astronauts on the way to the Moon had been passed by a sleigh and a man in a red suit going the other way.