Back when I was an undergraduate, I and a fellow student declared independence for Essex.  For some unknown reason, our declaration gost in the general background noise of news but we made it anyway.  Possibly not in public but that doesn't really matter.  We knew that Essex was the centre of the universe.

The evidence was plain.  The top cricket team in the country at that time was Essex.  West Ham United had recently won the FA Cup.  The up and comingest band in the world were Depeche Mode.  The drummer from Blur had just left school.  Obvious really.  Seems odd that no one else had joined up the dots.

Actually, it is even deeper than that.  We're talking 1983 here and Essex was a large part of the then political universe.  It was, in some eyes, Essex what swung the 1983 general election (my friend campaigned for the SDP that year - I don't do doorsteps) and gave the second Thatcher administration a landslide.  Sitting on the opposition benches was Jack Straw, later an integral part of successive New Labour Cabinets.  He was born in 1946 at Buckhurst Hill, Essex.

In the cinema that year you could go and see Monty Python The Meaning Of Life.  It doesn't include 17th Python, Neil Innes.  It should, because he was not only a member of the Bonzo Dog Doo Dah Band and therefore appeared in Magical Mystery Tour but also wrote one of Oasis's best melody lines in "How Sweet to Be An Idiot".  And he was born in 1944 in Danbury, Essex.

While the political colour of the country was getting bluer (and redder as opinions became polarised), a Dylanesque (TM) album arrived: Life's A Riot With Spy Vs Spy by the Bard of Barking (c) Billy Bragg (born 1957).  In those days, the music was stark, just like Freewheelin' era Dylan but there has been a slight mellowing over the years although Billy (yes, we're on first name terms) is something of a sage these days and is certainly a more thoughtful musician than most of those that arose from the punk generation.  (NB On Boxing Day 1983, Channel 4 screen the entire uncut edition of Dylan's "movie" Renaldo And Clara which I stayed up to watch.  Hmm.  Four hours of my life I won't get back.) 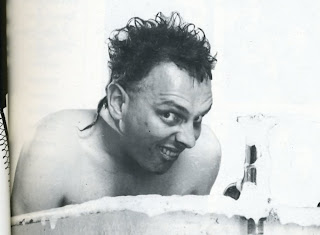 One of the hottest TV series of the time was The Young Ones, starring, inevitably, Essex born (Harlow) Rik Mayall.  It was certainly a series that got the TV common room packed in my hall of residence whenever it was on.  Mayall later appeared in Blackadder which debuted in 1983.  See, it is all connecting.

At what might be thought of as the other end of TV we had the Late, Late Breakfast Show, starring Noel Edmonds.  Edmonds was born in Hainult and was for many years the first voice that millions heard when they woke up - his breakfast show on Radio 1 was legendary.  My memory of his TV show from the year was when he premiered the Paul McCartney/Michael Jackson single "Say Say Say", or the video thereof, on his show.  Well, underwhelmed was my opinion.

Eight years old in 1983, but no doubt giving someone the benefit of his opinions, was Clavering born Jamie Oliver.  At the time he was known as the School Uniformed Chef for bringing cup cakes and Victoria sponges to the school fete.  In time he would become the most important celebrity chef, responsible for feeding the entire school population of the world.

Also in shorts was John Terry.  Now, there was a John Terry at my school but it wasn't the same as the famous footballing, name calling (allegedly), team-mate's wife escorting former England captain.  He was born in 1980 so he may well have still been in nappies, but for my purposes it was his birthplace that matters - Barking. Back to something intellectual.  Roger Penrose, born in Colchester in 1931, is a brilliant scientist and mathematician with interesting ideas on, for instance, consciousness, and who should have won a Nobel Prize long ago (but my opinion doesn't count).  This man worked with Stephen Hawking so he must be a genius.  Oh, and did I mention he's an Essex man too.

I could go on but I think you get my point.  Essex has contributed so much to the world that it should, in all honesty, be recognised as an independent nation now.  In fact, our aim in 1983 was to have a seat at the United Nations by 1987.  Well, nearly there.  Our outreach ambassadors have been doing a sterling job and I am sure world domination will be ours.  So those sons and daughters of Essex that I haven't mentioned but I am about to list will be rewarded: Russell Brand, Denise van Outen, Alison Moyet, the one with glasses in Depeche Mode, Tony Adams and Tony Parsons, Richard Littlejohn (I've put him in charge of community affairs but I'm not sure he's cut out for the job),  Richard Ingrams, Kenny Ball, Joe Pasquale, Alan Davies, Sandie Shaw and finally, but most not leastly, Dick Turpin.
Posted by Catmando at 03:19