I've been busy for the last few weeks but now I can come back to the keyboard, a couple of things that have drifted across my consciousness in that time can now occupy my time a little bit.  They both add up to what I think can only be called ignorance.

I am not proud of my ignorance but on most subjects I am ignorant.  I know little about many things.  I couldn't tell you much about the mineral wealth of Finland, for instance, or name the team members of the 1947 FA Cup Winners.  This is the sort of incidental ignorance that comes from not needing or wishing to know those things.  If I did want to know them, I am sure I could find them out.  After all, I am writing this to add to the general sum of things that make up the Internet which is where I would research what I needed to know.  I don't distrust the Internet's ability to give me the truth, but I do check to see if unrelated sites will give me supportive information or not.

Anyway, to the first of the signs of ignorance that lies beyond me.  It is an accidental ignorance masquerading as knowledge.  It is Rupert Sheldrake's latest volume, The Science Delusion.  It is the latest of two lines, one running through Sheldrake's work and one running through a line of previous authors.  It is the attack on "materialism", the idea that the Universe runs according to naturalistic rules, that nothing is actually predetermined and that matter doesn't really want to do anything.  Matter follows the laws of nature.  Simple.  Sheldrake wishes to assign a form of consciousness to matter and not just to living things.  It is hard enough to know where consciousness ends amongst the animal kingdom.  I don't know how, for instance, you can detect consciousness in, for instance, an argon atom.

I am sure that Sheldrake and all the others who get hot under the collar that science doesn't admit that there are mysteries which we cannot understand and therefore there must be something else, are totally genuine and honest in their beliefs.  I am also totally certain that they are wrong.  Not that there might be something else that we don't understand, etc, but that they are wrong on this idea of materialism.

If any subject of academic life is willing to be open to the fact that there might be something else it is surely science.  To have been alive between 1890 and 1920 and following closely the discoveries of physics must have been like being in those swirly cross fades between scenes in certain tacky sixties TV shows.  After all, much of what we now take for granted was unknown before 1890 and pretty certain by 1920: radio communications, x-rays, radioactivity, quanta, general and special relativity, the Noble Gases, the electron and proton, the atomic nucleus, radium and europium amongst other elements.  Keeping up with all that must have been a dizzying experience.  And biology was a similar melting pot.

And since 1920, science has continued to put out ideas to be shot down - the Big Bang, multiverses, strings and branes and dark matter and energy.  Some are pretty well served by a tranche of evidence and some are pretty speculative, but they are testable.  And better than that, they have a whole lot of maths behind them and, as we all well know, the equals sign means just that.

But amongst all this are some spectacular failures - N rays being one that gets trotted out because it is a good sign of what Sheldrake is a purveyor of.  Some call it pathological science rather than pseudoscience and this is quite a good term.  Pathological science is science that is genuine and honest but just wrong.  I feel that Sheldrake's morphogenic fields are this.  He believes them, as do some others, but the evidence, no matter how high it stands as a stack of paper, doesn't add up to a convincing argument as far as the majority of scientists are concerned.  Scientists are a bit like politicians in one important respect - they try to solve the solvable.  There is no point trying to test the untestable, or going back continually to retest something when it has failed to yield worthwhile or even positive results.  Mainstream science, a rather boring epithet, does not spend a lot of time on, for example, cold fusion, though some may pursue it.

You see, science is not averse to the unusual.  If it were then making progress would be slow or non-existent.  It is, perhaps, best described as semi-conservative.  What works well, what describes reality well, is preserved unless and until something better comes along.  That something better may never come along. If you want to know more about these matters, you could easily read the books of Brian Greene, Lisa Randall, Brian Cox and many others.

The second piece of ignorance is not the fingers in the ear I'm not listening kind outlined above.  It is the confrontational I have heard but I know you're wrong type.  Over at Why Evolution Is True is the story of a college newspaper article getting it totally wrong on evolution and the nature of scientific theories (http://whyevolutionistrue.wordpress.com/2012/02/08/only-a-theory/).  This was dealt with at essay length by Stephen Jay Gould when Ronald Reagan made a comment about evolution being only a theory.  A theory in science should be sufficiently well tested that it would be irrational to deny the theory's truth.  But of course scientists are a little vague in their use of theory.  String theory may or may not be true but at the moment the evidence is insufficient for mainstream science, although definitely interesting and certainly promising.  But perhaps the word theory should not be assigned to it.

One famous theory
Anyway, amongst Biblical creationists, the assertion that evolution is "only a theory" is meant to disparage the vast pile of evidence that supports it, and the logic and maths that goes with it too.  Many people don't realise there is plenty of maths associated with evolution but there is.  And it isn't hard to find this evidence.  But that doesn't stop creationist arguments tending to repeat themselves again and again.  Even creationists have got a bit wary of repeating themselves.  That doesn't stop them, or stop those who have picked up half of the idea repeating them.  I have, myself, had the fun of answering the "if we evolved from apes, why are there still apes" argument.

But to come back to my original point, there is no reason for ignorance in the developed world any longer.  There is the Internet and it is dead easy to find information out.  If you can't find a web page, or if you want to read the entire text of, say Richard Dawkins latest but don't want to hand over cash, you can go to a library.  It's not difficult.  But the writer of the article in the college paper is at a college, where they will have a good library, and has started a biology course (as part of her aim to be a teacher, I understand).  She has no real reason to be ignorant about what we mean by a scientific theory or what we mean by evolution, and certainly with respect to the evidence for evolution.  And it's not as if the evidence is difficult to read - some of the best of modern science writers (Gould, Dawkins, Coyne, Sean B Carroll, Stephen Jones and so on) have put pen to paper to give the general reader the evidence for why evolution is accepted by science.  And these writers are so good you can delight in the prose if you don't want to stick too closely to the logic and the science (though, of course, you should). 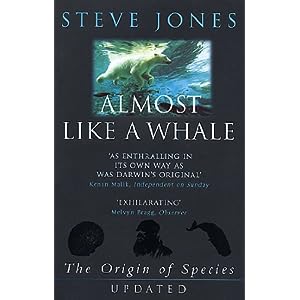 So, to sum up.  You can believe what you want but please don't resort to science if your ideas have no basis in evidence.  There are plenty of fields of life that don't require science but it is so powerful as a method of finding out what really is that so many fields cloak themselves in science, or at least scientific language.  And please don't let your ideas of science get ahead of the evidence.  You will be found out very quickly because there are true experts out there.  When cold fusion hit the headlines in 1989, and there was a rush to repeat the experiment, but some were already sceptical.  The reason - nuclear fusion was well understood and a form of cold fusion known about.  What was missing from the modern claim was the expected results that should have happened had nuclear fusion actually transpired.

Rupert Sheldrake might well be right.  Atoms might have consciousness.  There might be something else.  But "materialism" is so powerful, an idea that provides such wonderful results and gives us such a beautiful and fitting understanding of reality that it is likely to be impossible to dislodge.  Furthermore, it enables us to tell the difference between opinion and fact, and that is an important arbiter.  Scientists adopt the materialist point of view because it allows science to avoid the trap of being one person's word against another.  Without that, what is the point of science?