That's the way to do it

Charles Darwin was born 203 years ago today.  Unlike, perhaps, Michael Faraday or Marconi, you can get away without having Darwin's discoveries impinge on your lives.  Not.  Electricity and radio communications notwithstanding, Darwin helps us understand why we can feed 7 billion people, and that matters.

For reasons that I don't quite understand, some people regard Darwin as a figure of hate.  They blame him for the rise of Nazism, and abortion and who knows what else.  As if a simple scientific theory (yes, a proper theory, tested and shown to be good) can be the root of all evil.  The twisting of it can, of course.  The wrongful application of it can.  Just as the atomic bomb and nuclear power stations are two sides of the same coin, eugenics and artificial selection of plants and animals for profit are two sides of the same coin.

Here is not the place to go into why Nazism bolted on science rather than grew out of it, or to discount creationist myths.  No, here we should celebrate Darwin's true achievement.  He took an idea and worked at it until he was convinced that it was as watertight as he could make it.  Even then he was not ready to publish.  He realised what a left field idea natural selection was and probably would have held out as long as he possibly could were it not for the fact that a friendly rival, Alfred Russell Wallace, had the same idea and wrote to Darwin to explain it to him.  Darwin's friends persuaded Darwin to break cover, go public and let the world know of his theory.  In 1858, when the theory was unveiled at a meeting of the Linnean Society in London, the world's reaction was.... nothing. 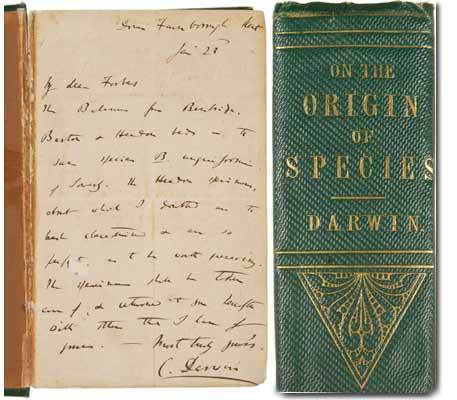 It took another year, during which time Darwin assembled the manuscript of On The Origin Of Species out of the much larger manuscript he had been writing, before the idea truly reached the public and there was a reaction this time.  Scientists, on the whole, accepted the idea.  The public was a bit more ambivalent.  The church mainly hostile.  Predictable perhaps.  Darwin's book was a best seller, and a piece of pure scientific research.  The reason why science could accept it was because Darwin had done his work.

Here was a novel idea, backed up by superb research, including experimental results, collected from around the world.  Darwin also realised that there were gaps that would need to be filled in and that others would do that for him.  He wasn't so arrogant as to criticise his critics for their ignorance.  He listened and reworked his ideas on that basis.  He was wrong on inheritance but right on so much else.  The stack of evidence collected in the 150 years since is huge.  It is wrong to go against the idea of evolution by natural selection on the basis of science.  Those that deny it do so for other reasons.

But Darwin was much more than the evolution man.  He could lay claim to founding modern biology.  After all, he gave it a unifying theory.  He virtually invented psychology, plant physiology, sexual selection and much besides.  His works were many and varied and he is usually charicatured by those who have read little beyond a potted biography (like this one).  I say virtually back there because I am sure others will lay claim to inventing those fields too.  But Darwin did so much, he is rightly lauded as a great scientist.

A few years back there was much excitement in certain quarters at the revelation that scientists were actually arguing about evolution.  Books were written about it.  It was knock me down with a feather territory.  Scientists argue about all sorts of things.  It is part of how science makes progress.  If everyone agrees in a scientific field, it becomes stultified.  What really happens is that scientists examined assumptions, go back and test ideas, try new things, use new techniques to find out whether they got it right or not.  One textbook piece of science, the natural selection of the peppered moth, Biston betularia, came under scrutiny.  In short, the Industrial Revolution made trees sooty, and this favoured the dark form of the moth rather than the lighter form.  Birds would see the light form resting on trees.  Those light ones would then get eaten.  The original research suggested that dark forms would prevail and so they did.  Recent research, in the light of the suggestion that the results of the original research were not, let's say, entirely valid, has shown that, knock me down with a feather, the dark ones will prevail on dark backgrounds because the moths do actually sit on tree trunks at dawn and get eaten by the birds if they can be spotted.  One up for Darwin.

My post yesterday on ignorance is balanced by this one.  I thought of calling it knowledge but it is subtly different to just knowing stuff.  It is about being right, for the right reasons and with the right evidence to back it up.  Science can encompass speculation, and does, if it has a basis in fact and if it is interesting or testable.  Science does not encompass those speculations that rely on chucking out so much valid, tested and reliable evidence that it is like starting again.
Posted by Catmando at 13:31