Predictions for the rest of 2013

The Cat in the hat has stared at the tea bags in the recycling thing the local council gave us recently for food waste and has come up with some predictions for what he thinks will happen in the rest of 2013.  Strictly for fun.  No sueing when it becomes clear that your trip to Paddy Power hasn't yielded the return it might have done had my predictions come true.

After the coldest spring for (fill in your own number here) years/since records began/since cherry picked date that makes your claim to prove climate change is a hoax, climate change denier sites plan to hold a party.  On the appointed day, wearing thermals and woolie jumpers against the cold, fifteen of the assembled throng of sixteen are treated for heat stroke and dehydration.  Choosing to hold the party during Wimbledon was, of course, a big mistake.  James Delingpole blogs from his hospital bed that the extreme heat wave is a hoax and he has the emails, hacked, to prove it.  The band Heatwave provide the entertainment.

The visiting Australian cricket team begin the Ashes badly when they hold a photo shoot alongside the 1985 and 1978-9 teams in an effort to prove that they are not the worst Australian team ever.  Things get even more confused when Australia name Murray Bennett at their spinner and Kim Hughes as captain.  Understandably, England have no clue how to cope with the straight on ball or the odd field placings (fielders can't hear the instructions through the tears) that Hughes sets and capitulate to an innings defeat.  Choosing even more players from the past teams secures Australia an unlikely 5-0 series win.  Tweeting from his retirement home, Shane Warne says "Clearly I wasn't bad enough to get a call up #hairtransplant".

As the heatwave continues, the government erects a statue to Dennis Howell, minister for weather in the seventies.  In a glowing tribute, David Cameron tweeted from his sun lounger in Skegness "Here was a man who could control the weather #StopBoris".  Climate change deniers picket the unveiling with placards saying "Hoax" and "Conspiracy" and waving hockey sticks in an ironic attempt to be ironic.

The heatwave breaks and James Delingpole is allowed out of hospital, although his carer has to go with him.  Part of his treatment has been to read peer reviewed scientific papers on a wide variety of subjects.  He has been on a strict watermelon only diet.  He announces in his Daily Telegraph blog that he should humbly apologise to scientists the world over.  He write: "I don't have a clue about science but I have asked a reception class teacher if she would explain some things so that I might get myself up to the standard of a five year old and see how it goes from there.  This science thing is actually quite tricky.  You need to understand some sums as well so I might ask the teacher to help me there too.  I reckon I can master the two times table before Christmas, metaphorically speaking." 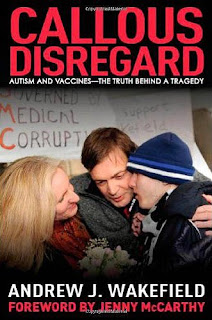 A judge, in a landmark judgement that only judges can adjudicate upon, says "It is not up to courts to decide whether a scientific idea is right or not.  That is for scientists."  Members of the press assembled to hear the outcome of Andrew Wakefield v Intelligent Life Anywhere In The Known Universe, fall off their chairs in amazement.  First time a judge has been known to get it this right since the Dover Intelligence Design case of whenever it was.  This appears to be the final slap in the face for Andrew Wakefield who tweets "Obviously disappointed. Have to sell the house now #KirstyAlsop".  Antivaxxers claim a conspiracy. "It's a conspiracy" says John Stone of Age Of Autism. See, I told you.  Anyway, far from being undaunted, antivaxxers produce three examples of a vaccination that caused a slightly sore arm and begin a new campaign with the slogan "You might feel a small prick but this is actually something really big".  A new paperback edition of Wakefield's book comes out and sells three copies, enough to keep the roof over his head.  In an updated chapter he outlines the unethical procedures he put upon children, such as lumbar punctures and endoscope investigations and how none of that proved anything. Britain's first (or fifth) astronaut, Tim Peake, heads nervously to the launch pad only to find that strong wind has knocked over the milk bottle launchpad and thatwas now pointing in the direction of Skegness.  The launch is cancelled, but there is still chance for a lovely display of Roman Candles, Catherine Wheels and various members of the public holding sparklers in lengthy tongs sonce the sparklers represent a clear health and safety hazard.  The old ones are still the best.

As the Daily Mail quotes figures suggesting that the year is heading for its hottest average temperature for, well, since the middle of the Cretaceous, the Met Office hurriedly points out that actually it has not been this hot since the Jurassic.  Anthony Watts of the website Watts Wrong With That says that he has been saying global warming has been correctly predicted all along and you can check his previous utterances on the subject if you wish.  Someone does and finds that he has been a tad mendacious.  Just a tad.  Humiliated, he goes back to weather presenting, this time with Anglia Movie Wireless (KRAP-TV).