Cartoon history of the world part 94 The above comes from this post http://wattsupwiththat.com/2013/06/14/an-engineers-take-on-climate-change-2/ entitled An Engineer's Take On Climate Change by Ronald D Voisin.  I refer you to the right hand end of the squiggly blue line.  I shall not draw your attention to the y axis which is marked with three temperatures.  I don't know if they are true but I am prepared to bet that there is a chance the figures are somewhat wrong.

I shall not draw your attention to the joke of an x axis with its long ago and today labels.  After all, the thing does say it is a "Cartoon of Earth Temperature History".  Cartoon is right.

Let's look at the empires.

Egypt - which one do you mean?  Lots of choice of dynasties and kingdoms but generally what we call Ancient Egypt lasted from 3150 to 332BCE.  That's a long time but Voisin rather seems to think that it had one spell and one spell only.   2818 years

Greece - it is generally accepted that what we call Ancient Greece lasted from the 8th century BCE to the 6th century AD. Approximately 1400 years.

Oh, and I think the idea of the Dark Ages is rather passe but never mind.  I am guessing that Voisin went to an American high school and I am not sure what the curriculum was like in the humanities.  Did all right for himself in the workshop though and has a good track record in lithography.

So let's be charitable and say that Voisin is cherry picking his history to fit with his favourite hypothesis.  If nothing else it is a Eurocentric view.  What about empires out in the east, or in the Americas?  Were there really episodes of civil chaos and mass migration?  Sort of but if those labels are to mean anything they have to have been migrations in search of better conditions.  In the Celtic dispersal in the middle of the last millenium BCE, the probably heterogenous group is tracked through culture rather than genetics and it is wholly possible that what is being traced is the exchange of ideas and not actual movement of people.

As evidence, of course, the graph is nothing but propaganda and deserves to be screwed up and thrown in the bin. Especially since those with very little between the ears, sorry, the average climate science denialist, won't look at the niceties of whether or not any of it is even remotely true but nod sagely and agree that this climate change malarky is a dodgy business, what with those nasty emails, all two or them out of, how many was it, oh, five thousand.  It is a disgrace that this site won an award for its science content.  And not one that said this site should be avoided like a very nasty rash.

If you don't believe me, here is a quote, lifted directly from Voisin's piece:

Where to start?  It is estimated that the global biomass of insects is 1000000000000kg.  Lots of insects that one.  But the biomass does not remain as biomass for long.  Insects die. They decay, they respire and they fart. In short, biomass generally returns to the atmosphere as carbon dioxide before long. That's where I shall end up.  But there is pretty much equillibrium in the carbon cycle, unless something unbalances it and guess what that something has been since the last ice age.  Yep, humans.  We've been changing the habitats of plants for several thousand years by clearing forests and planting crops, which we then eat so we can respire them and turn them back into atmospheric carbon dioxide rather than locking the CO2 up in nice tree trunks for hundreds of years.

And we stick our domesticated meat machines on the fields to turn more of that juicy vegetable biomass back into CO2.

And humans don't just stop there.  We hack down whole forests so we can build on them, concreting them over (limestone cycle: thermal decomposition of limestone producing more carbon dioxide for the air that was captured millions of years ago in sea creatures) and burning fossil fuels.  I cannot see, and Voisin doesn't justify, how you can actually make his idea of insects making more CO2 than humans work.  Yes, individually there are more ants than humans.  And in terms of biomass too.  But ants and termites are producing CO2 in ways they didn't, for instance, in the middle of the last ice age, or the one before that.

Well, Voisin is an engineer, not a biologist.  I bet he doesn't spend much time in the garden watching the natural cycles of the seasons, the years, the decades.  Like so many deniers, he doesn't make sense.  For his science to work, all the little bits of science must actually be correct.  It's like making a jigsaw puzzle of Buckingham Palace and trying to shove a piece from a puzzle of the Tower Of London into it.  The thing is wrong and the cartoon graph is just the wrongest.


Post script
In an article with only one diagram, is it necessary to label it figure 1, especially as it isn't even anything worth referring to in the first place.

Does anyone really think that? Rather a lot of carbon dioxide buried in carbonate rocks and rather a lot to put into the atmosphere.  I think the environmental destruction would preclude this experiment happening but it would decide the issue once and for all.

For AndyG55 wherever he is, here is a picture of sequestered carbon dioxide exposed at the surface but in many parts of the world lying buried that should, according to you, be in the atmosphere, aiding life. 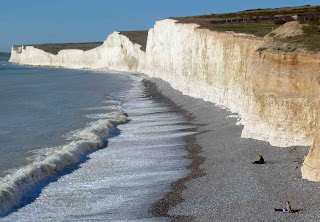 And chalk is rather common.

Will these people never learn?