A Night With The Stars

The other week the DailyTelegraph published an article pointing out how sexy science is at the moment ( http://www.telegraph.co.uk/science/8946805/Brian-Cox-and-co-sexy-science-pulls-in-the-crowds.html ).  At last, I say.  It's been a while since A Brief History Of Time when arts and humanities graduates were falling over themselves to say how they had reached page 23 of Steven Hawking's most famous work and understood, well, some of it.  I read that book in a day (it isn't all that long) but because I had been prepared by earlier reading, I knew much of it already and it didn't seem all that difficult.  But then I do have a BSc.

Tonight I watched the BBC's current favourite, Professor Brian Cox, give quite a challenging lecture on quantum theory to an audience comprised of a number of celebrities (and others I didn't recognise).  The hour flashed by, and I learned plenty.  I learned why the exclusion principle is true, for instance.  I shall be rereading his first popular science book again as a result.  It was good to see the BBC had the confidence to put a challenging science programme on at peak time on a main channel, BBC2.  Science is truly sexy again.

Not only have we had Cox's Wonders programmes, but we've had two series on geology, two on human evolution, series on the history of science, on Darwin, on chemistry and maths in recenty years.  And on Radio 4 is Prof Cox again, in the gloriously entertaining The Infinite Monkey Cage.  And that's just the BBC.  Channel 4 also puts out science programmes and it also seems content not to dumb down.

It got me thinking about the last time I could remember when science was so ubiquitous on the BBC.  For me it was 1978-9.  I was in my last year of compulsory education, approaching O-levels, and was helped by the presence of blockbuster series: David Attenborough's Life On Earth, James Burke's Connections, Jonathan Miller's The Body In Question and one off documentaries: Peter Ustinov explaining Einstein one Sunday afternoon, Dudley Moore getting to grips with time late one weekday night (when I should have been revising or in bed ready for an exam the next day).  And there was Tomorrow's World and Horizon, the BBC's steady workhorses of science and technology. 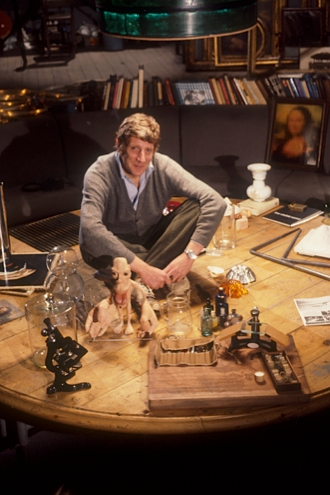 I am sure some of the reviewers of Prof Cox's lecture will have misunderstood the thing.  They will perhaps see the place of James May or Jonathan Ross as yet another sign that things are forever dumbing down.  Perhaps they will have missed the calculation that Ross was "invited" to take part in, demonstrating how unlikely it is that an object, any object, that we can hold in our hands will leap suddenly through quantum processes a couple of inches to the left.  As an explication of how science works, what science has achieved and how to teach it, the lecture was a triumph.
Posted by Catmando at 14:31