Marcel Proust, who famously (according to Monty Python, had a haddock, is remembered mostly for an enourmously long book that few have read and for a tiny part of that book referring to a cake: 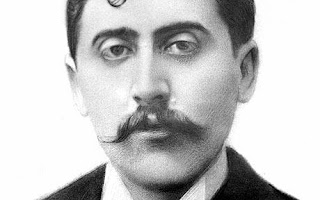 "No sooner had the warm liquid mixed with the crumbs touched my palate than a shudder ran through me and I stopped, intent upon the extraordinary thing that was happening to me. An exquisite pleasure had invaded my senses, something isolated, detached, with no suggestion of its origin. And at once the vicissitudes of life had become indifferent to me, its disasters innocuous, its brevity illusory – this new sensation having had on me the effect which love has of filling me with a precious essence; or rather this essence was not in me it was me. ... Whence did it come? What did it mean? How could I seize and apprehend it? ... And suddenly the memory revealed itself. The taste was that of the little piece of madeleine which on Sunday mornings at Combray (because on those mornings I did not go out before mass), when I went to say good morning to her in her bedroom, my aunt Léonie used to give me, dipping it first in her own cup of tea or tisane. The sight of the little madeleine had recalled nothing to my mind before I tasted it. And all from my cup of tea."

For me, my madeleine moment comes each summer as I sit to mark exam papers.  There is no need to break a confidence here, so my bosses at a major exam board need not have apoplexy, because it is not the students' responses that matter but the question papers themselves.  Upon seeing them I am transported back to a hot and airless room where I am sitting trying to delve deeply into the recesses of my memory for facts about chemical equilibria and electron spins, aldehydes and ketones and, well, anything that had been drilled into me by my chemistry teachers for two years.  For some unknown reason it is the chemistry exam that I recall, and in exquisite detail.

I can remember the desks, giant wooden ones with a slight slope and holes for ink wells at the top right hand corner.  They are varnished and a honey glaze colour.  There is a board at the front, for chalk, with the start and finish times on it.  Because it is a lengthy paper, the finish time is after normal school finish time and the rush for the bus home.

I can remember the light on my right but although it is a sunny day, the northern aspect means I don't get it directly.  Just as well as it is warm enough already.  And I remember the fact that my girlfriend of the time will be waiting in the corridor outside for me when I finish.  We shall be going to her house straight after.

The memories of the exam room (it was the only time I sat a paper in this, a maths room normally so perhaps that is what makes it stand out) widen into the broader brush strokes of that exam season.  There is the music: George Harrison's Somewhere In England, the Floyd's The Dark Side Of The Moon (which I initially found dull), Simon & Garfunkel, Beach Boys, The Byrds and The Beatles.  There is sitting in the local park between papers one day.  And going to see tennis at Queen's Club with John McEnroe throwing a tantrum, because he was bored (as was I - it was one sided game).  Oh, and England were doing not so well in what became Botham's Ashes.

The George album is one of my favourites, even today.  I love it not just for the music but the memories it evokes too.  That summer was a glorious time: Charles and Di's Wedding, the end of school and the promise of university, the Ashes, discovering all sorts of new music (and heading distinctly the opposite way to my brother's soul fixation).

The thing is, why does my memory, and everyone else's I believe, play this trick and bring forth a vivid memory from a tiny stimulus.  I think the answer is a simple nobody knows.  Partly, I think, because no one really has got to the bottom of how memories are stored, whether chemically, in DNA or RNA or as circuits of neurons.  The teleological answer to the why question is almost certainly because a similar situation can require a similar response, and the stronger the original emotional investment, so to speak, the more likely it is to get a deeper and more detailed memory.

So my biology papers never evoke this response because I was better at those and the chemistry was the one I really wanted to get right.  But memory has a habit of being so elastic that it can get stretched out of shape.  Did I really go through those things I described?

In this case, the answer is pretty much a yes.  But one memory I have and which differs markedly from my dad's recollection of the event is the first moonwalk.  I saw bits of it on later rebroadcasts during the day of 21 July 1969.  My dad is adamant that I was awake for it, even though I know I wasn't.  I went to bed after the lunar module landed and have no recollection of anything until I awoke the next morning at normal time.  I was brought down to watch but I was so tired it made no difference.

So in true memorial fashion, perhaps we should have a where are they now item to finish up.

I suspect my chemistry teachers are well retired, possibly still with us.  The old girlfriend left me for a marine (honest) eighteen months later.  George Harrison died in 2001 and my dad is still with us.  Unlike Ian Botham, my dad never got a knighthood.
Posted by Catmando at 02:13