Some thoughts on Levon Helm

A sad moment, last week, when Levon Helm, the heart and soul of The Band, passed.  A truly great voice of American music is gone.  I don't think I've been so sad at someone's death in a long time, outside of those people I knew personally that is.

It is a strange thing, mourning a celebrity.  There's a scene in the John Lennon film Imagine where a delusional young turns up at Lennon's mansion.  John is kind hearted but blunt enough to point out that the songs aren't about the young man.  If anything, they're about John and Yoko.  I never felt for one minute Levon and The Band were singing about me.  They just seemed to be having so much fun. 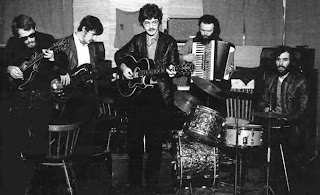 The Band were five master musicians, three superb singers, one great songwriter and a fantastic bunch of men.  When the world was going day-glo crazy, they decided that a monochrome world was much more interesting.  No Sgt Pepper for them.  Instead, they turned on a whole bunch of more famous muicians, Clapton, Elton, George Harrison amongst others, to the possibility that songs could be quiet, played with wooden instruments and rely on the soul of the musicians to make them special.  They did just that.

I came to The Band in the way that many others must have done over the years, through the music of Bob Dylan.  The Band, while known as the Hawks, back Dylan in 1965-6 on the tours that are famous for the booing and the Judas shout.  Levon backed away from that so he's not on the famous 1966 bootlegs.  He didn't come back until 1967 after Dylan had fallen off his Triumph and cracked his neck and his campadres were doing quiet but soulful things in a basement with a four track tape machine.

In 1968, The Band emerged in their own write with Music from Big Pink, an album so out of synch with the times that it could have been from another planet.  But it is also chock full of classics, "The Weight", "I Shall Be Released", "This Wheel's On Fire", "Tears Of Rage" and so on.  If you're going to buy one Band album, then this should be your second purchase.

That's because the follow up, the brown eponymous album, is even better.  I won't list the tracks to look out for.  Just buy it.  It's a classic and better than anything you'll find on the album charts this week by a huge distance.  Those three singers, rather than fill up the song Mariah Carey style, know when to sing and when to leave alone.  That's my mark of a great singer.

And Levon was a great singer.  A rich southern accent gave him a distinct singing voice.  Better than that, he was the pivot of the Band.  Not quite as steeped in alcohol and partying as Richard Manuel or Rick Danko, or as studious as Robbie Robertson and Garth Hudson.  Without Levon The Band might not have been worth listening to.  He gave the group a soul that the others could swing around.  And he did most of it from the drummer's stool.  There are few drummers who sing, let alone do both at the same time so well as Levon did.  And that loose drumming is distinctive and all his own.  Levon, like Ringo, played the song, not the drums.

After the second album, The Band fared less well and it is convenient consensus that says they never regained the heights but there is a bootleg of a concert a few weeks before their break up Last Waltz gig that is required listening.  Luckily they were taped for a radio station and the results were superb.  I won't tell you how to get it but if you do, you'll know why it is recommended.  But in those six years The Band did not let their true selves become lost.  The music was still as true as ever, with highlights on lesser albums that most groups would give arms and legs to have: "It Makes No Difference", "Stagefright", "Arcadian Driftwood" and so on.  When they split, it was in style, and with Martin Scorsese's cameras in attendance.  Buy the movie.

Like I said, I came across The Band when listening to Bob Dylan.  That was 1982.  The first album I bought was a best of.  It took me three years to get down to listening to them properly and now I wouldn't be without them.  I stayed up half the night to watch The Last Waltz on BBC2.  I even got the reunion albums in the 1990s.  I didn't appreciate The Band until I was grown up.  And that in the end may be the greatest compliment to them.  They made grown up music in a world of screaming teeny boppers.  When The Beatles grew up and grew apart, they did so as a clone of The Band.